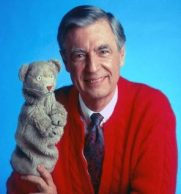 I had a spare grandparent. And this grandparent visited me every day, was interested in what I was doing, asked me questions, talked to me about my feelings and told me the coolest stories that involved a land of make-believe…

He also taught me how crayons were made.

For many, it was always easy to make fun of Mr. Rogers and his show Mr. Rogers’ Neighborhood, but I never could. Even as an adult, I look back on it fondly. Yes, I loved Sesame Street, Saturday morning cartoons, Donald Duck, Looney Toons, but Mr. Rogers spoke to me… directly to me.

I think one of the reasons I felt so close to the show is that my grandmother was a very popular kindergarten teacher. No, popular doesn’t do it justice, she was a celebrity in her hometown. When we would visit stores together we would have grownups of all ages approach her to say hi and give a hug. And my grandmother, with a skill I cannot imagine having, could always see the child behind the older eyes. She never got a name wrong, never.

When I think back on conversations with my grandmother, it always feels a lot like how Mr. Rogers speaks during the show. That patience. That unblinking interest. That humor that seems to hide behind the wink and smile.

Looking back at my experience watching the show, I think the great takeaway I had with it is that he taught me how to use my imagination. See, I always knew the land of make-believe wasn’t real. I knew they were puppets (many performed by Mr. Rogers) or adults dressed like dogs, but he taught me it was okay to pretend, to play, to make time each day to sneak into my imagination. And knowing that difference helped me to cherish the magic of pretend that much more.

… and even though I had not watched his show since I was a kid, I made sure to tune in for the last episode of Mr. Rogers’ Neighborhood, which turned out to be no different than any other episode, giving the hope and promise that he would be back again. Of course, that is not how things work in reality.

… and when he died, it felt the same as when a family member passed away, and I read every obituary and article I could find on him, on his life. I wanted to know him beyond the show, the real him, but everything I found showed him to be the same person I felt I knew. It was not an illusion. That was a wonderful realization.

…and when I wrote my novel Megan—a magic-realism fantasy about the importance of dreams, being a good person, friendship, and the fragility of life—I used a quote from Mr. Rogers’ at the front of it.

“The world needs a sense of worth, and it will achieve it only by its people feeling that they are worthwhile.”

That is what Mr. Rogers was for me. 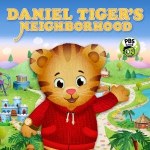 When I first heard of the show it felt a little like a violation. Like someone was exploiting another’s product, life work, for their own devices, their own profit, but even more than that. Yes, it felt personal, because I imagined someone in some corporate boardroom with a big cigar exclaiming: “Hey, all the kids who watched that old show with the guy in the red sweater probably have kids now! Let’s see if we can play off their sentimentality! It worked for The Electric Company!”

Because of that immediate feeling, I avoided introducing the show to my children for a while. I remember the first time I heard and saw the opening theme, it felt off. The jazz jingle was there at the beginning but then it slipped away into something much less fun. (I’m a lifetime jazz fan and I truly believe Mr. Rogers had a part in that, jazz can feel like comfort food for me sometimes. Wynton Marsalis was on the show!).

Yet… once the show appeared on Netflix my children were soon asking for it, watching it everyday. My wife was telling me about the show and even though I had yet to watch an entire episode, my reluctance was starting to break. Then there was the Saturday that changed it for me.

One early Saturday morning, my daughter woke me up, and took me downstairs. These are the moments I cherish, when it is just me, solo with one of my kids, having a quiet moment. And my daughter, who shares a middle name with my grandmother, wanted to watch the show. She cuddled into my arms as the show began and I almost wondered if she was going to fall asleep… but she didn’t.

Instead, my daughter began to interact with the show. She sang along to the catchy jingles Daniel sings in the shows. (My favorite being “Grownups come back.” That one is a gift to parents. The jingles are one of the things that make the shows standout from so many other shows like this on TV.) She answered Daniel’s questions, and tried to help him when he asked. And in that moment, I realized I was seeing more than my daughter with a new friend on the TV, I was seeing myself at that age.

That moment made me a fan.

For those that haven’t seen it, the show takes place roughly a decade after Mr. Rogers’ Neighborhood has ended, and all of the characters have gone on in their lives. Daniel Tiger has married and has a son named after him (the lead on the show). Prince Tuesday has a younger brother (Of course named Wednesday). Heck, even Lady Elaine Fairchild got married.

Yes, Lady Elaine who used to cause so much grief and argue with King Friday and lived in the Merry-Go-Round got hitched!

Not just hitched, she married someone really cool! A musician who runs the music store! And they have a daughter that calls everyone “Toots.” Unbelievable!

The one fault I have with the new show relates to my great takeaway from the original.

See, in the new show the land of make-believe is real, even going so far to combine parts of Mr. Rogers’ “reality” with the imaginary realm. The land of make-believe is not something we are joining in the pretending of, it is real to these characters. Those are real roads for them (not sets), real schools, real homes, not pretend things that we are all sharing in. We aren’t bringing them to life, they are already there. That is a loss and I think part of the original point of those segments is lost, but I can’t think of any way to fix it without a major restructuring of the show.

Oh, and here is another odd bit, in every episode Daniel will stop and imagine something which always makes me think I am experiencing a children’s version of the movie Inception– a make-believe inside a make-believe. But again, who is the dreamer?

I want to believe that everyone behind the making of the original Mr. Rogers’ Neighborhood is associated with the new show. All of the actors, the producers, the family members. They got the band back together! I tried looking online but I can’t really tell if that is the case, all I can see is who isn’t there, who isn’t taking part. But that original show was so long ago, it might be just time and age are playing a part. Hopefully, they can find a way to bring some of them back in the future.

But who is to say what is the case in the recording studios? I could spend all day imagining the behind-the-scenes moments, just like I did when I was a kid, trying to picture Mr. Rogers, crouched over, doing his best to work a small puppet of an owl in a fake tree.

Yes, I like to imagine a lot of things around this new show and the old one and it is easy to do.

All you need is a Trolley.

If you liked reading my review, why not check out some of my published books? I’ve had four novels published in the last few years, the new A Jane Austen Daydream, Maximilian Standforth and the Case of the Dangerous Dare, My Problem With Doors and Megan. You can find them via my amazon.com author page here, or Doors and Megan as an eBook on Google eBooks here. Thanks for reading!

8 thoughts on “Growing Up in the Neighborhood: Mr. Rogers to Daniel Tiger”