Question 1: Is it wrong to judge a person for supporting a racist candidate? Does that make me questionable as well for my own judging?

First off, I’m not going to go into a long discussion about who Trump is and his history. If you don’t know about him, well, I don’t know what to say. Personally, I’m a big fan of how the Huffington Post ends every article about him, listing that he is a racist, liar, etc. (All undeniably true.) The fact is we have NO idea how he would govern; all we have to go by on what he would do is his words. And his words are bat-shit crazy.

But Trump’s craziness is not my struggle. I can wrap my brain around that. There has always been crazy in this world.

The thing is I am I judging people when they say they support him. I hide friends left and right on Facebook, drop people on Twitter. Because I immediately think they are crazy and racist too. I mean, who you support says a lot about you, right?

Now, I know, I know!, there are people that view politics like sports, and support their parties like you would a favorite team. Even if your team is in last place you will wear the hats and cheer and curse at the television. Sport fans can’t imagine changing teams, and some political party devotees feel the same way. The problem for me is I think we miss something in this sport mentality. Politics shouldn’t be sports.

Shouldn’t we be Americans first, and party affiliates second? At least that is my dream.

Argh! You see my struggle? Even in trying to understand (or find an explanation) for someone’s support for a questionable human, I find a different way to judge them! And it doesn’t even begin to explain the mountain of people that voted for him in the first place.

I hate being this guy. I like to see the good in people. In many ways I am an optimist (a sarcastic optimist, but an optimist all the same). It’s just I wouldn’t back or support a person like this… ever. So I judge and it makes me sad.

I look forward to November when that candidate heads back to reality shows to yell, and we can all go back to taking on the real problems in this world with a level mind.

Question 1 (additional): How do you change a Trump yes voter to a no?

That one is really bothering me. For we like to run to logic to build an argument, but that is not working. If it was a logical decision, the switch would’ve happened back during the primaries. (Remember when he brought up the idea that Ted Cruz’s father was part of the JFK assassination? Jeepers!). The support seems to be more emotional. So how do you change someone’s emotion around a subject? That seems more personal, like a loss of faith would be.

Question 2: Am I starting to get too old for video games?

I grew up on video games. I happily remember high school weekends where I would stay at a friend’s house and we would play all night. Seriously, all night, lost in a world of bright colors and Nintendo (and way too much caffeine).

I never had this question with video games until I started playing Kingdom Hearts Unchained X. (Yes, I’m going from a deep political/philosophical question to a Disney video game. That’s how I roll.). It’s a new online game based on the popular video game series. I’ve always dug Kingdom Hearts, playing all of the games out. I even had the freaking soundtracks!

This new game has some good points, and some bad, but I made the mistake of linking the app to my Facebook account. Which means others can see my face and I can see theirs…. And I’m old. So flipping old.

Then there is Pokomon Go. And I am walking around a park with my kids finding cartoon animals. They are loving it and I’m wondering what I’m doing with my time and do other adults really do this?

Last year… just last year… I was excited about Final Fantasy XV and Kingdom Hearts III, but today I’m overwhelmed by just the idea of losing a month’s worth of evenings playing a video game. Isn’t there more important things to do? I’m adapting Hamlet for Cripes’ sake! (Check it out here).

Wait! That is not all! For the last three years, I’ve also been doing Fitbit. Which, honestly, pretty much makes me the video game. So this video game mentality could go down to my very core, but should it?

Question 3: Are Marvel films getting drab? 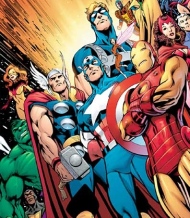 I’ve always been more a DC fan than a Marvel fan, but Marvel has been knocking it out of the ballpark when it comes to the movies. DC had The Dark Knight, but the rest has been very hit and miss.

We get two new Marvel films a year and they are feeling so… I’m sorry, I just yawned and I feel so, so bad about the yawn.

I think the problem is Marvel did this to themselves. They are stretching these stories and characters out and out and giving us nothing in between. See, we only see them at their best and their worst, never their everyday. The quiet moments that define a person. Harry Potter had adventures, but he also had to go to school and deal with friends.

We have seen over 12 hours of Iron Man, but do we really know the dude? He dumped Pepper Potts in the last movie, we have no idea why (he worked to save her and their relationship in the third movie). And suddenly we get the idea he has parent issues. It feels like we are skipping over so much.

And don’t get me started on how each film has a formula with the same beats! I could almost clap my hands when each new beat hits. Yes, there are some fun little surprises in each, but they are all structured like an action hero film of the 1980s. All they are missing are Chuck Norris or Arnold. They could definitely use some fresh writers in their midst.

Now I love super heroes as much as the next guy (my favorite TV show for the last two years has been The Flash), but I’m starting to want more. I want more moments to see behind the cape at the real people underneath. Not just at a party or in tears, but how they are wired. I want to feel I know them. I get that from Barry Allen and his crew every week on the CW, but I don’t get that in the movies. Here I just get punches and explosions and then closing credits. I want to care about the people being punched. It’s just not there yet

If Marvel truly wants us to care about what the heroes will be experiencing when they take on Thanos and his glove they need to take the time, much like Peter Jackson did in The Lord of the Rings.

Or maybe this is all just me?

Enjoying the writing? Why not show your support by checking out my newest novel?

Permanent Spring Showers was published by 5 Prince Books. You can find out more about my novel as well as my other books (including A Jane Austen Daydream and My Problem With Doors) and grab a copy via my author page on Amazon.com here.