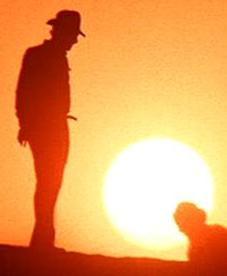 While my first real memory is seeing R2-D2 on the big screen, the first time I felt real fear in a movie theater belongs to Indiana Jones and the Temple of Doom.

I was seven, and for some unexplained reason my relatives thought I was the perfect age for seeing the Temple of Doom on opening day, the first PG-13 movie. I chalk it up to a very selfish decision on their part personally; my parents were not thrilled that they did this by the way and complained to them later. As everyone on the planet knows, the Temple of Doom is a dark movie that only seems to get darker with each step it takes into those underground caverns.

For most of the film, my seven-year old frame was on the edge of my seat, somewhere emotionally between terror and excitement; I wanted to see what would happen, fighting back the urge to run and hide.

It was the heart scene that finally got me. I screamed like a banshee and my uncle had to carry me out. Instead of comforting me, he put me down on the ground, coldly told me to take a breath and then turned to the door to watch the film through the circular window in it. I vividly remember staring at his back, trying to count my breaths, and wondering what he was seeing through that window; it was the wonder of that window that is I remember most from that day.

I did return to the movie in time, because I had to see what would happen next; but I also didn’t sleep a good night’s sleep for the next five days… which is probably one of the reasons my parents were rightfully upset.

The first time I saw Raiders of the Lost Ark, I had to watch most of it with one eye covered.

Another uncle (a much, much better one), brought over his new VCR to show my family the movie. I have no recollection of what they were celebrating but he also brought champagne with him. I remember this point because when he popped the cork it smacked me right in the eye. So there I was, glued to the television, with a cold compress against my eye, so entranced that I didn’t even realize when it had completely melted and didn’t help anymore.

It was from Raiders that my true obsession with the character took hold, and that obsession has continued for the rest of my life. I’ve read the paperbacks; collected the comic books; dressed as Indy for two Halloweens; bought ever version of the film ever released (VHS to DVD); purchased all of the toys after the fourth move; watched and own all of The Young Indiana Jones Chronicles (even have all of the episodes with the one-eyed old Indy); and I’ve been on the ride at Disneyland so many times I have it memorized. AND over my multiple visits to Disneyland, at the Indiana Jones store, I have purchased two fedora hats, a sweatshirt, a sweater, a coffee mug, a beer mug (I don’t drink beer), action figures, books, and even a picnic blanket.

To top all of this, I went to the University of Southern California to study writing for film. Why? Because that is where George Lucas went.

Okay, I still might not be the president of the Indiana Jones fans in some people’s eyes, but, damn it!, I’m a secretary of something. You can give me that.

Over the 90’s, I examined every article, read and watched every interview, studied every leaked script (fake and probably real) around Indy and the mysterious fourth movie. I became obsessed with forums and debates online around it, patiently waiting (Who am I  kidding? Not patiently waiting) for Lucas to finish his more and more frustrating Star Wars films so this could move forward.

A lot of moviegoers had issues with Indiana Jones and the Kingdom of the Crystal Skull (still a mouthful of a title), and rightly so. For me, I still like the film for two reasons: it is a new Indiana Jones film and Marion Ravenwood is back. And as much as we may argue about monkeys, Shia (I’m assuming Indiana’s daughter from the now edited scenes of The Young Indiana Jones Chronicles comes later) and a confusing ending, the fact is in the movie the filmmakers were trying to make an end for the Indiana Jones series.

How much of an ending is it? It ends with a wedding, between two characters we always hoped would get together. They even gave Indy a son! You can’t have more of a happy ending than that! It is right from the Disney playbook, all that was missing was them dancing to a slow song sung by happy animated animals.

But it wasn’t enough…

It would never be enough, we all wanted a fifth movie (and something that reached the bar of the other three previous outings), and instead of just saying no, George Lucas began teasing that it might happen.

Ever since the film, Lucas has said again and again that he is working on something. And when asked Harrison Ford and Steven Spielberg also will say that Lucas is doing something with an idea. That is nice in theory but it goes against a lot of facts that seem to be becoming more prevalent around this possibility. What are the facts?

Is Indiana Jones done and Lucas just saying all of this to keep interest around the character alive? Help DVD and Blu-ray sales? Is it all smoke and mirrors? As much as I would love to just close my eyes, believe in Lucas, and take that step off of the side of the chasm like in Last Crusade, reality seems to be against the dream.

Of course, all of this discussion brings up the question I have always had around Indiana: why is he not like James Bond?

Indiana Jones was famously inspired by 007, it is the reason why Sean Connery is his dad. So why can’t Indiana be like Bond in its output?

Yes, we love the idea of Lucas, Spielberg and Ford working on these films, but there are a lot of adventures that could have happened while we waited for the three to act. Don’t believe me? Check out all of the paperbacks printed over the years (good and bad), comic books, young adult books (like the great choose-your-own-adventure books from the 80’s). etc. There are a lot of possibilities for this character, so why put him on the shelf like this?

And if The Young Indiana Jones Chronicles have taught us anything (besides history, historical figures, other cultures, and World War I, of course) it is that others can write, direct, and even play Indiana Jones. Sean Patrick Flanery was great in the role, and technically it can be said we have seen a total of four other people play the part made famous by Mr. Ford. So it is possible, no matter how sacrilegious it is to think that thought, because it frankly has been done before.

Just like outside that theater so long ago, I need to take a breath…

Whatever the case and whatever happens, Indiana Jones has been a major inspiration on my life. I will always be thankful of that. And while I love the idea of more adventures, I’m coming to grips more and more that this might be it.

But that is life, right? Everything comes to an end, from puppy dogs to cute kitty cats, and even movie heroes, so why do I keep hoping for one more, one final adventure? An adventure around England chasing King Arthur’s Excalibur or a trip to the Middle East to find the Garden of Eden?

That is the problem with Indiana Jones and one of the joys of being a fan. There is always possibility, no matter how improbable.

It makes a person want to shout like Belloq: JONES!!!

9 thoughts on “Losing the Fedora: Is Indiana Jones done?”