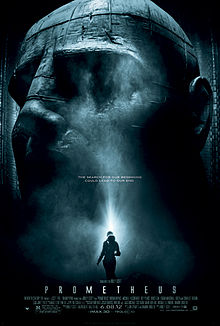 I just saw Prometheus which opened up a lot of questions for me. So if you have not seen the movie yet, consider yourself warned about this article. There are massive spoilers (I’ll warn you when I am about to start with a scream like this: Ahhhhh!!!)

In preparation for seeing Prometheus I rewatched the director’s cut of Alien. Since that was the only film that Ridley Scott directed from the Aliens series, I felt I was safe just rewatching that one.

See, I was hoping I would go in fully prepared to see all of the little connections to the first one. Since the script was written by the genius behind Lost, Damon Lindelof, I was expecting a lot of little touches and references… well, just like any episode of Lost, but this time in space; where they can’t hear you scream, but we still do apparently. And here is the spoiler scream- Ahhhhh!!!

Okay, how does this connect to the first one exactly?

The space jockey from the first movie was explained.

The space Jockey in Alien is clearly a different one than the ones we saw in this movie, since that one was able to get off the planet and had an alien inside of its belly. Is the simple answer that there were other ships out there? Yeah, I guess so. But I was hoping for something a little more clear than that.

And if there were more than one ship out there flying around with deady aliens, are we to assume it was also destined for Earth and we are lucky that one crashed too? Making the big engineers very unlucky, I guess. Who would have guessed it was so difficult to destroy our planet? We do a pretty good job of it by ourselves without gooey alien help every day.

Now my memory might be a little off, but wasn’t there some kind of an SOS transmission that was calling to Ripley’s ship in the original movie? I always assumed there was a “human” ship someplace on the planet but they didn’t find it. See, I went into this film thinking that the ship sending the SOS would be the Prometheus, but it wasn’t. (Yes, I know that is quite a bit of assumptions and I know what that makes me, thank you.)

More strangely (and possibly unnecessary), at the end of Prometheus, they show an alien burst from the chest of a engineer… but why? I mean, that alien doesn’t have a chance! No people to live off of, and it will probably be gone by the time any other ships arrive on the planet… which again makes me ask why?

Was it done to just remind us of the first movie?  Did that birth mean something more than I was getting?

And then all those new questions…

So the engineers constructed us out of their DNA and then decided they wanted to wipe us off of Mother Earth? Okay, I get that… Fun little apocalyptic idea, but what about all of the new questions that opens.

WHY do the engineers keep returning to merry old Earth and telling the humans where the planet was, which we are to assume was a military depot in some way? Isn’t that like us hanging around some obscure South American tribes saying, “Hey, there is a big nuclear weapon factory right over there… but don’t go there… We just want you to know it is there… No, right there, see where I am pointing… Okay, let me draw a little map so you can see where I am talking about…”

What? And why? And what again?

Did the engineers at that point know that they were going to destroy all life on Earth? If that is the case why delay and just do it then while we were only able to create cave drawings? It doesn’t fit.  Let me try looking at this differently… Chronologically!

Did I miss anything?

It just doesn’t fit. I feel like I have found a bunch of puzzle pieces, but I am not sure if they are from the same puzzle or what the final picture may or may not be… assuming the pieces work together. Argh!

A big general why?

Lost was all about the questions. We wondered what the island meant, and while we got some kind of an answer (remember the giant wooden plug?), we still left with questions. This feels a lot like the cousin of Lost, and a part of me wonders why it had to have so many questions at the end?

Yes, mystery and horror usually go hand and hand (since something has to be figured out to explain all the, well, horror). But Alien didn’t have this many questions, it was pretty straightforward in many ways, and the characters didn’t seem particularly stressed about the giant dead space jockey like us the audience did. They just wanted to survive.

Are we to assume that this is just to set up a sequel where we get more answers (and probably more questions)? The next adventure of Elizabeth and the head of David on their way to another world of engineers? (A ship I would like to point out filled with freaking baby scary aliens!)  And how does that world (or this one) relate to the world of Aliens, where Ripley became Rambo and saved a little girl?

One of the things I loved about Lost is that not only did we get questions, but we also got a little farther in answering them each week. And who didn’t like debating each episode afterwards? But here… Who knows if we will get any answers? This may be just it.

Ah… I… Well… Well, at least there were no midichlorians.

3 thoughts on “Prometheus: So Many Questions…”