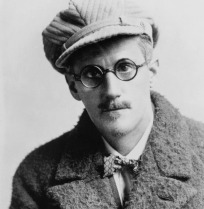 That is how I see James Joyce and his library of creations.

I heard it once argued that if it wasn’t for the demands of the English college classroom Joyce would not be in print today. I was initially stunned by that concept, but as the years progress I begin to believe it more and more.

He is not someone who people pick up for a little “light” reading, and his characters and plots are not exactly the most moving. Yet, what Joyce does have is incredible creativity on the page, with language, characterization and, of course, his influence on stream of consciousness as a writing style.

I don’t want anyone to think I am dismissing Joyce. Hardly, I think he should continue to be required reading for English majors and writers (especially those that want to do something artistic and new as compared to pulp everyday fiction which flood our bookstores each year).  He is the granddaddy of avant garde writing, especially around modern literature. I get all that… It’s just I find him… well… boring and frustrating.

As compared to a lot of other readers, Dubliners (the easiest of his work to digest since it is a collection of short stories) was not my first experience. My first dip into Joyce was Ulysses.

You can’t help but be awed by the audacity for referring his work to the Odyssey by Homer. I mean, to take that epic work and compare it to a normal day of citizens in Dublin is still an astounding concept for me. It is even more so when one considers all that happens in the actual Odyssey and what little happens in Ulysses.

That is not to say Ulysses is boring, but it is fair to say it (like most Joyce) is not exactly a normal book with a plot that drives it forward. What drives Ulysses is the characters and the internal monologues they have. If you are interested to discover how much a writer (if they put their mind to it) can dive into a character’s consciousness, this is it.

It’s not a book that is read, but studied.

What I liked about the book, is that each chapter is so different from the others. From the last chapter (with its stream of consciousness over 8 sentences, 8!) to the script structure of chapter 15. Yet, it’s not enough to really recommend the book for me, or to really give it the standing in literary circles it has today.  See, while I believe there should be some artistic exploration and groundbreaking in literary work, I am nervous when it is done to the ruination of plot.  And comparing your work to the Odyssey like that only emphasizes to me the lack of it.

A Portrait of the Artist as a Young Man

I always felt A Portrait of the Artist as a Young Man to be a more satisfying read since you follow the growth of Stephen Dedalus over the course of his young life. He matures into the character we see in Ulysses. Maybe it is the aspect of time and this character growth that makes it easier for me to enjoy.

If I was to say I love any of his books, it would be only this one and it would be merely for the scene at the end of Chapter 4 where he finds the young woman bathing. It is beautifully written moment, probably the best he every put to paper, and in it you see the awakening of the soul of Dedalus.

I would recommend this book just for those few pages.

My relationship with Finnegans Wake is a little different. Simply put, I wanted to prove I was the bad ass of all English major bad asses.

See, this was the mid-90’s and I needed to apply to grad schools for English Literature. I had papers on Shakespeare, Austen, Dickens, and others in my file cabinet that I could have used, but a part of me wanted to prove that I could do anything. Oh, no, I will not be the normal English major in your department! I wanted to come in as king of the mountain. Hi, my name is Scott and THIS is my brain.

Finnegans Wake is the most difficult book to read in all of English literature. Period. With no real beginning or ending, it is a mish-mash of images and language, resulting in some kind of a free-flowing story about… well, really no one has any concrete idea.

Is it a dream? Is it death?

Those may sound like easy questions to answer, but they are not… and those are the easiest questions to attempt to tackle around the work. I read this book three times. Three times! And I am uncertain whether you can call it reading, because every sentence is so open to interpretation, you really walk away with what you bring with you to the text originally. Whew.

Here is an example of what I mean, the second sentence of the book (or the first real sentence, since the first is the ending of the last sentence in the book):

Yeah, I read an entire book like that three times.  Three times, back to back….

The first was to get through it, prove to myself I could. I waited then, thinking about what I read and how I interpret its characters and meanings. I then re-read it to prove (and disprove) a lot of what I thought. The third reading was to… just… to help emphasize to myself that I would be okay because no one can really know if I am right or wrong.

The book, if you can call it that, is a masterpiece of confusion. Joyce (who spent 17 years of his life working on it) always claimed that it all worked and made sense together. I would have loved to have had that debate with him.

In Dublin, they cherish James Joyce. There are statues and photo tours, and other extravagances for interested literary-minded people.  One can’t help but wonder if they have confused him with a more likeable writer. But if you want to drink at the same pub as Bloom, you can. Yippee!

Yet, when I hear about this celebration or that celebration around him, I wonder exactly how many really know what they are celebrating. James Joyce was a great writer, certainly, but he needs English Majors; and English Majors need him. I just don’t understand how the rest of the world fits into that calculation.