Have you ever had a day when you just wanted to write an episode of the Jack Benny Program, as if the radio show was still on the air? (Or is that just me?) What would they be talking about today? Enjoy!

DON: Quiet Sunday afternoons can make any man contemplative, even Jack Benny. Today we find our esteemed host walking through his neighborhood deep in thought.

JACK BENNY: (Thoughtful) Well, this neighborhood certainly has changed over the years… Neighbors have come and gone. Some have died, some have moved. I only sued a few of them…

JACK: Fifties… Sixties… I was here for the Beatles. Now two of them are deceased and the other two are in their 70s. (Pause) I’m still 39.

JACK: Don’t know how I do it. Yet, even at this age, I still see the tripping of time… Maturity that is what you get with the days. You can’t be young and foolish forever.

DENNIS DAY: Excuse me, Mr. Benny have you seen my little red wagon?

JACK: (Holding back his own laughter) What did you say, Dennis?

JACK: Dennis, I have known you for so many years, how are you still so incredibly ridiculous?

DENNIS: A daily regimen of pushups, vitamins, hijinks and tomfoolery.

JACK: Dennis, have you noticed how much the world has changed? How the world has begun to embrace multiculturalism, and different voices and talents seem to rise every day. Oh, some fight against the changes, but they can’t stop the tide of change. They will lose in the end, you can’t stop positive change. It is definitely not the privileged world we knew back when our radio show first aired.

DENNIS: (Frustrated) Have you seen my red wagon or not?

JACK: Look, Dennis! A lemonade stand! I haven’t seen one of those in age. Just like the old days. I even did one of these when I was young.

DENNIS: How much did you steal from the masses during the black plague?

JACK: Dennis! How old do you think I am?

DENNIS: Did you sell to Lincoln?

DENNIS: (In a silly old-timer voice) I just call it as a I see it, bub!

JACK: Let’s go. I don’t see anyone here. Do you think they will mind if we just take a glass and…

MARY: So the cat is away, the old, violin-playing mouse will play. I was just below making some more lemonade. Keep your hands off the glasses. Pay up first, Jack.

JACK: Mary, you are selling lemonade?

MARY: I need to make a living. It’s been a while since we made a radio show.

DENNIS: Have you seen my little red wagon?

MARY: (Holding back her own laughter) You lost your wagon, Dennis?

DENNIS: (Sing-song style) Oh where, oh where can it be?

JACK: Stop it Dennis. Mary, if you need money, you can always ask me for a hand.

MARY: I only have two hands to give Jack.

DENNIS: Can I have a glass of lemonade, Mary?

MARY: And before you ask I don’t have a permit!

PHIL: Hi you, old, money-scrooging little doll, you. Stealing some lemonade from some poor helpless child?

PHIL: Not a child at all. Hello, Mary. I would steal some lemonade too. Don’t skimp on that sugar, Mary, you sweetie, you.

DENNIS: Hi Phil, have you seen my little red wagon?

JACK: Phil, what is going on over at your house?

PHIL: Come on over Jackson and look. It is my new car, it is a beaut, and some friends are just helping wash it.

JACK: Well, that is a nice looking little car. So slick and modern. And who is that helping you wash the car?

JACK: Don, how are you? It has been a long time.

DON: Jack, I was just thinking. Do you remember when you would joke about me being heavy on the radio show? All those jokes about my weight?

JACK: Yes, it was a little insensitive of me. I admit that. I’m sorry, Don.

DON: Scared that we are now in the majority, aren’t you?

JACK: Don! Well… And the Sportsmen are still with you

PHIL: So what do you think of my wheels, Jackson. It is the latest thing.

JACK: It is certainly sporty.

PHIL: It is more than sporty, Jackson. This car is electric.

JACK: (Trying to hold back his own laughter) So no gas?

PHIL: When I want to get its motor running, I just need to plug it in. Plug. It. In.

JACK: How is it, Phil, you can make everything you say sound like I should be making confessions at church?

PHIL: I make even the priests blush, Jackson.

JACK: Maybe I should think about getting a new car like yours… Maybe it is finally time.

MARY: Jack you aren’t still driving that old Maxwell, are you?

PHIL: Still driving it? Mary, it’s more like a series of pushes. Pushes!

DON: Mary, he recently lost his front wheel and did you know what Jack did?

DON: Instead of buying a new tire, Jack stole a red wagon and put it right under the hub.

(Dennis sings a selection of songs from “Lemonade” by Beyonce.) 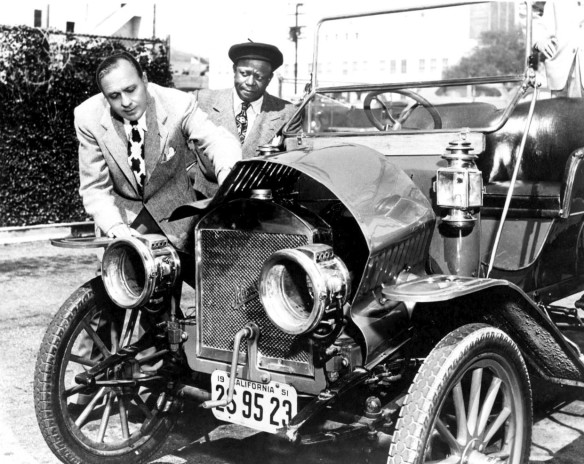 SOUND: Exaggerated Maxwell car noises; Rochester and Jack are driving it down the road.

ROCHESTER: Mr. Benny, why are we driving to a car dealer?

JACK: Well, Rochester, climate change is real and it is about time that I make a positive difference in this world.

JACK: And a gas guzzler like this car, is not helping with my carbon footprint.

JACK: And driving gas cars like this supports governments that promote injustices and inequality and businesses that care more about the dime than the needs of future generations. There is blood in each gallon we fill in our cars, we just try not to think about it while we are at the pump.

JACK: And owning an electric car or a car that drives on E85 is a money-saving bonus for…

ROCHESTER: It does make me wonder, Mr. Benny.

ROCHESTER: Can we talk about some equal pay?

JACK: But Rochester, we have such a good system. Every fifty years feels right, don’t you think so?

ROCHESTER: Oh, Mr. Benny. That is not the world today. I’ve been here for the good times and the bad times Mr. Benny. I was here for radio, for television, and even movies. Every step you took, I took with you.

ROCHESTER: Right next to your high price shoes in the sand were mine with the holes in the toe. There should be more equality in pay, think about who was just president.

JACK: I’m thinking it over!

ROCHESTER: I don’t know why I stay with you sometimes, Mr. Benny.

ROCHESTER: Every time I see my friends they run up to me shouting, “Get out! Get out!”

ROCHESTER: You think I can afford to go to the movies?

JACK: We’ll talk about this later, Rochester. Here is the car dealership. Turn it in there.

ROCHESTER: (Over dramatic) You made it, old girl. You can close your eyes now, you did good. Tell the angels we say hello.

SOUND: Doorbell dingles as they enter.

JACK: Are you Mr. Ferguson?

CAR DEALER: No, I’m Stanley. Ferguson is over there, Ferguson is on lunch and Ferguson is prancing through the tulips like a happy bumblebee. How can I help you?

JACK: Hmmm… I would like a new energy efficient car.

JACK: Something that shows everyone that I am doing my part to help the environment.

JACK: Something that says, “World, I am on your side.”

CAR DEALER: You want to save money.

ROCHESTER: He’s got it! Yes, he’s got it! He got it right! First try. Right off the bat!

CAR DEALER: Well, we have a lot of sporty options for a modern couple like you two.

JACK: Well, they all look so nice and new and modern.

CAR DEALER: Each will show you two as cutting-edge souls taking on the world and all its prejudice, together, hand in hand.

JACK: What is the price on a car like this?

CAR DEALER: Oh, you have a good eye. That is one of our top sellers. You can sync your smart phone right to the console, so your music can go right with you. You can even control the car temperature with an app.

JACK: Below the zeroes?

CAR: DEALER: No, with the zeroes.

CAR DEALER: But you need to think of it as an investment. Think of the money you will save and the difference you will be making.

JACK: Is there something a little more in my price range?

CAR DEALER: What is your price range?

ROCHESTER: Somewhere between I want to help the planet but I am okay losing either the north or south pole.

JACK: Yes, the one pole option.

CAR DEALER: Well, this one over here is used, but it is practically new. And it is definitely better for a family, because of the space available throughout. Do you have children?

JACK: No, but I do have a quartet.

JACK: I don’t either.

JACK: I wouldn’t say that.

CAR DEALER: If you have a trade-in, this figure will go down.

JACK: Why, yes, I have a trade-in! It’s a classic. One of a kind. You probably have never seen a car like this outside a book.

CAR DEALER: Should we have a look?

ROCHESTER: “Get out! Get out!”

CAR DEALER: Why is he saying that?

JACK: It’s right there? Isn’t it a beauty?

CAR DEALER: Behind the garbage truck?

CAR DEALER: Now, sir, I’ve worked as a car dealer for thirty years. Thirty years! When each of my beloved children were born, do you know where I was? I was here. Each time my precious jewels cried for the first time. Here! Right here, selling cars and in all that time… all that time… I never saw a car like that or met someone like you!

JACK; Does that mean we have a deal?

CAR DEALER: This is the first time I might have to charge extra for the trade-in.

CAR DEALER: We need to get it away from the front. I might even have to charge you for the customers you might be scaring away. Shoo Shoo!

CAR DEALER: And is that a little red wagon?

JACK: If you are going to be that way about it. We can take our business elsewhere! Come on Rochester! The world can take care of itself!

JACK: Does anyone have anything they want to add after all these years? Some deep thoughts or reminiscences that capture a bygone era?

DENNIS: Can I have my little red wagon back now? 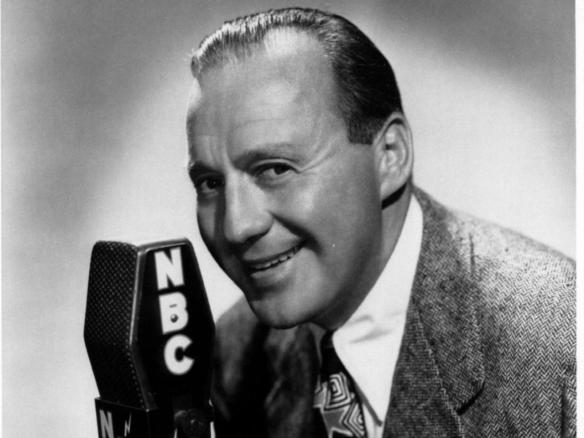 1 thought on ““Jack Tries to Buy an Electric Car!” A new episode of the Jack Benny Program”