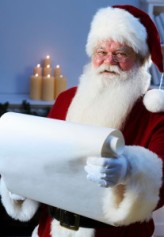 I totally get it.

Each year the media world is starving for new holiday stories. They want them for the bookshelves, for the TV screens, and the cinemas. So why wouldn’t any struggling writer (which is 98% of us) not want to give the old Santa Claus an adventure or two?

It pays the bills and, maybe, you will unwrap the golden present. In other words, create a holiday tale that becomes a classic, one that audiences return to yearly… which can also pay the bills yearly as well.

The problem is that for all of the attempts to make that blessed holiday classic it so, so rarely happens. Most holiday tales disappear at the end of the year. The books and the DVDs end up in the bargain bins, and the TV specials and movies are shown at random times in the early morning (if they are shown at…