So when I started this blog, I had nothing but the best intentions. I made lists and lists of different things to write about.

… Then I sat down and did way too much about Disneyland and Game of Thrones (two things that should never be in the same sentence again).

Let’s have a brief tangent- I’m one of the few book readers that is thrilled that Game of Thrones is passing the books. The script writers for the show certainly have their problems (for example, they go darker than the books, amazingly), but one skill they do have is the ability to edit. They cut, cut, cut the books down to something a little easier to consume and that is no small feat. I’ll never be totally happy with the calls they make (poor Sansa) or even the calls Martin makes (poor Ned), but at least we’ll be getting an ending to the tale in the new few years.

Okay, where was I? Recently, I found my list of original ideas for blog entries, focused on only one current theme- what interests the guy writing this.

Below are three items I always wanted to dive into and never got around to. Not to say they aren’t interesting, it’s just… I’m a very important and busy man (no, I’m not). I have a lot of writing responsibilities (ha!). These short essays are the best  I can do (that is probably true). 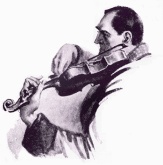 I know people die and experience pain in the stories by Sir Arthur Conan Doyle, but when I became obsessed with the characters at age 13, it all felt like literary bliss.

I dreamed of that. Desiring nothing more than putting on my deerstalker and racing through the foggy streets of London.

I didn’t just dip my toes in the world of Sherlock, I jumped in the pool; collecting Jeremy Brett’s amazing work as the great detective and the old films of Basil Rathbone. I even collected the radio series Rathbone made during the glory days of radio, as well as the radio series John Gielgud made (who is my vote for the best performance of the sleuth).

It’s incredible to me how long I’ve lived with the stories, breathed them. They inspired my own writing (my experimental literary novel- Maximilian Standforth and the Case of the Dangerous Dare which you can find on amazon here); I even created a parody of Sherlock that has been performed a few times on the radio (you can hear one of the live productions here).

It all means something, but I can’t say what. Others probably can point to religion for something similar in their perspective on the world, but I’ve never been a religious person. Yet, if you were to find me laying in the fetal position on the couch watching an old Rathbone film, you will be able to quickly guess what kind of a day I was having.

Yeah, I still hope to be saved from time to time. Honestly, I think I would look good with a pipe.

So a while ago Admiral Ackbar died.

Well, that is what the world knew Erik Bauersfeld the voice actor for. A few lines in a popular science fiction series and a catchphrase. But for me he was the voice of Smaug the dragon, Theoden, and Elrond.

There is this radio production of The Lord of the Rings that Tolkien fans love to hate. It’s by Mind’s Eye. The actors hilariously mispronounced named and the voice actor of Sam is famously known as well for being the voice of Smurfette.

Yes, I said Smurfette. (I can’t imagine what Sean Astin thinks of that.)

When I was a kid I was obsessed with this radio series, owning all of the tapes and listening to them all the time, and it was a common occurrence for me after the ringbearers say goodbye to jump right back to the birthday party.

One of the things that really make this series unique for Tolkien buffs is they didn’t run away from the literary mess that is Tom Bombadil. Not only does he appear in the show, but he gets his own entire episode.

For me, there is a wonderful feeling of “Let’s put on a show” vibe to it. You can tell the actors like each other and sometimes are fighting the giggles. They really don’t seem to care about getting it all right. This is more just about getting through Tolkien’s story, from beginning to end. Granted, and I will be the first person to say this, it is not the best introduction to Tolkien’s amazing imagination. It’s not for everyone.

Recently, author Christian A. Larsen (Thanks!) hooked me up with other productions that Mind’s Eye made. It’s really sad that much of the work this American radio drama company made is being lost. In today’s post-radio drama world, it’s great to know that people were still aggressively putting up the good fight once. Because there is this little known fact… putting on a radio show is a lot of fun.

A few nights ago I had a dream where I was blogging.

This may sound incredibly lame, even for us bloggers (and that is true), but I woke up feeling rejuvenated and a little surprise that there wasn’t a new blogpost waiting for me on my nightstand. It felt that real, it felt that finished. My dream blogpost was about the brilliant TV show Northern Exposure from the 90s.

1200 words of bliss and adoration for a show that began each episode with a moose.

In my dream, my article was profound, diving into the rich textures that made the show one of my favorites. I touched on characters and themes, even breaking down the highlights of the show (the second and third year are some of the best in network television) and its bitter (and ultimately) depressing end.

Sigh… The main creators and actor gone, and a head writer that seems unable to put his finger on what makes the show special. (But he would find success when he would create The Sopranos a few years later, a show I also have major qualms with- *Cough*Cough*No character growth*Cough*Cough.)

But here is my question, the question I would like to ask my dream version that seemed so tickled by the article:

The show is still off the air; it won’t come back. And some of the cast members are dead, gone. And really, were there more stories to tell? Sometimes the show would struggle for plot. Granted, the show was more about the characters, but when Dr. Joel left a lot of the conflict left with him. After that it was more like visiting with friends. That is fine (I like friends), but not compelling.

I’m certain that someday, I will find my old VHS copies of the show. I will laugh at Dr. Joel again, once again have a crush on Maggie, and beg all the gods to make me as cool as Chris Stevens.

Right now though, I like where it is residing in my brain. It’s a little place in the back, something like an attic, probably dusty… but it also includes badly-voice hobbits, and a detective just itching to solve a case.

2 thoughts on “Three Things I Have Almost Blogged About…”