Wow, I can’t believe I am already up to eight in my series “With Music.”   In each post I write about a time in my life, using a song that impacted me or reminds me of a moment.  The earlier seven entries included Ben Folds Five, Sheryl Crow, Beth Orton, Dean Martin, The Verve, Barenaked Ladies, and Tori Amos. This time I write about finding inspiration in Los Angeles.

I am haunted by a song.

I sometimes hear it in my dreams, it is the one I might start humming when I am running an errand or absentmindedly finishing a chore. I’ve even been known to sing it to my children as they fall asleep.

This song has followed me for almost a decade and I believe it will be with me until I let one special book go.

I was sick of being a number.

There were a lot of students in the master’s program in writing at the University of Southern California and I felt like I always had to prove myself. Every class was the same, an introduction to the others in the room and then a slow stomp up the literary stairs to the top of the class. Maybe I would have had an easier time being in competitive classrooms like these if I went to a bigger college for my undergrad. Then I was a big fish in a small pond. I was the writer of the entire class of English majors. It may sound egotistic to say I ruled the school, but it felt like that as I went from writing workshop to workshop then.

But at USC it was different. It also didn’t help that I started the program in the middle of the year. Everything was settled by the students on their own personal rankings by then. You would see in the classrooms which students were worth listening to and which created the most eye rolling (and there were a lot of eye rolling). I was the odd man out, the question mark in the class, and I could sense it.

Those writing classes could also be stressful and aggressive. Students would argue about each others’ works, some teachers would spur it on (maybe even weirdly enjoying it) while others did their best to try and keep some control over their classrooms. I wish I could say I played it smart in the early months, biding my time and getting the lay of the land.

That would be a lie though if I said that.

I’ve never been the kind of reader or editor to mince my words, if something needed work I would say it. Period. And if I made a suggestion and the writer returned the next week not making the correction I recommended, I would write them off, not worth my time. In other words, if you don’t want to be saved from a collapsing house, who am I to criticize your remaining rubble?

I’m not sure if the program was driven by number of students or quality of the work, but it always seemed to lodge someplace between the two. There was some fantastic writers there (some that even gave an ego like mine a pause), but there were others that would make you wish for a time machine and a long conversation with a misguided supportive high school English teacher who probably gave a certain student the wrong kind of confidence.

I don’t want you to think I am a jerk. I’m not a Jonathan Franzen, with my ego knocking literary buildings down like Godzilla (the nightmare of most librarians, right?). Far from it, for I had learned a long time ago how it is to live under a dream and a wish. Literature was that dream for me, and being at USC was, in my opinion, one further step to making it a reality.

I was supposed to be there, I just wanted everyone to realize that as well.

Yet, after a year and a half in the program, I was frustrated. There were challenges certainly, and there were some teachers I felt were useful on my writing journey, but they were the random pebble on the beach, the rest was messy sand. Like I said, a lot of eye rolling.

There were a few things that helped keep me sane during those years. Red Dwarf, Cowboy Bebop music, the occasional trip to Disneyland and my brother all jump first to my mind. Here is the thing, my brother wasn’t supposed to be there in LA. And he definitely was not supposed to be in my one-room dorm apartment. He was my covert roommate.

We had it all brilliantly worked out. He wouldn’t enter or leave the dorm apartment complex from the front door, he used the back door; using a key I made for him (by the way, a key that had written over it “DO NOT COPY” and I had no problem copying; gotta love Los Angeles). My brother moved out to Los Angeles with acting dreams, but so far his experience then revolved around extra work. He would leave in the morning and spend more than 12 hours standing around in the background, returning later with stories about celebrities and how bored everyone looked.

My brother and I shared everything in that apartment, we were strangely closer than we were living as kids in our parents’ home. Everything in the kitchen we shared, video games and television time was decided between us. There were also evenings where we would just sit and play chess.

In a way, we were both waiting for our lives to start. Luckily though, we didn’t have to do it alone.

The special book, my secret book, was my master thesis for USC and it was probably the most unique writing experience I ever had.

Every book I have written has been a different happening, but this one was almost spiritual. It was a calling. I felt this book in my bones and it came almost completely out of thin air. For two weeks (only two weeks), I would get up before sunrise, sit at my little mac and write. My brother would hear me typing like a fiend when he would rise to get ready to head to a film set; and find me when he returned in the night. (I was always his odd older brother, I’m sure he was used to brushing such stuff off as “just Scott being Scott.”)

I don’t remember anything really about that time in my life, other than the clicking of the keyboard and the sheer (and tiring) ecstasy of the creation. I remember a thrill, I remember a feeling, I remember a passion.

When I gave it to the head of the department (early) for his review, he almost seemed irritated by the interruption of it in his midst. I bothered him on two separate occasions afterwards to see if he had opened it (no and no). Then I got an e-mail from him saying he planned to “crack it open” that afternoon. That evening, after 10 he called me on the phone waking me.

He read the entire thing over one afternoon and evening.

The novel is entitled Cassandra on the Island, and even though I have written many books since it, I have yet to feel ready to have it published. Maybe it is selfish of me, but I like keeping this book close. It is a watermark for me, a line I try to reach with each book I do. To have it published and in the world, it feels like that will be lost. I return to the book every year or so, and it is so easy for me to slip into the characters, into their lives.

The book had a lot of influences, from Virginia Woolf to John Keats, and has imagery throughout it that feel almost dreamlike to me, musical. Some would call the work magical realism, but I don’t. I like to think it taps into the magic that is just living.

For there are magical moments all around. I see them, and today I try to teach my kids to see them. It kind of reminds me almost of what Kurt Vonnegut once said about life:

And I urge you to please notice when you are happy, and exclaim or murmur or think at some point, ‘If this isn’t nice, I don’t know what is.’

This is a book about stopping and noticing those moments.

Maybe someday the book will be released, maybe when I am ready to let it go and can bear to read a negative review. Until then I keep Cassandra and her family and the entire island that the book takes place on close. Hidden.

I know I failed in this essay. I feel it. It’s hard to write about writing, it’s hard to capture a moment of creation. And what is exciting for me about spending entire days staring at a computer screen and scribbling inside coffee shops, to you just sounds boring, common. The fact is though this was extraordinary to me. These few weeks made me who I am, defined me in my own little way. And besides the reaction of the head of the department, I proved the point to the only person I really needed to. Me.

I could do this writing gig, creating work that I am proud of that hit a certain level of creativity and originality that I like to read and discover myself. Everything (good or bad) after that is noise to a certain degree.

It’s been that way ever since. 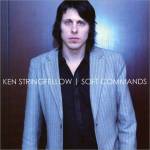 When I think back to those weeks and this secret novel, I think of a song that almost shares a title with the book. “Any Love (Cassandra Et Lune)” by Ken Stringfellow. When this beautiful song comes up on my player, I will usually close my eyes, tapping into again that energy I felt then, remembering the magic I felt when my fingers could never dream of moving as fast as my creativity demanded.

But here is the odd thing, the wrench in the plan, the song was released after all of this took place. The song came afterwards. There is no way I could have heard the song while I was writing the book. So how do they feel so connected to me? That is the mystery for me.

I like to believe (and this is the creative writer in me saying this) that while I was in Los Angeles writing like a demon, off in France, Stringfellow was coming up with the song. Maybe it was a meeting of the minds on a different level, a different plane. Bouncing off some stratosphere that has yet to be measured. Some spiritual meeting between us over those long miles, creating two pieces of art that share so much.

A strangely beautiful and tying “Hello.”

2 thoughts on ““Any Love (Cassandra Et Lune)” by Ken Stringfellow”