Today on WKAR’s Current State I reviewed the new historical fiction by Jami Attenberg. It is called Saint Mazie and published by Grand Central Publishing. Check it out.

You can listen to my new review here: http://wkar.org/post/book-review-saint-mazie-jami-attenberg

If you would like to check out Saint Mazie  you can find it on Amazon here. If you want to check out my other book reviews for WKAR’s Current State, you can do so via links on this page. 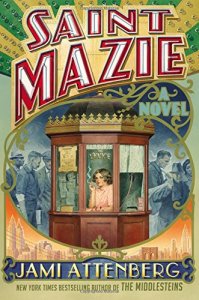 In the 1920s and 1930s Mazie Phillips was known as the Queen of the Bowery. There were two places you could’ve found her back then. One was behind the ticket booth at the Venice Theater in New York City where she worked. The other was walking the dirty streets handing out quarters and dimes to the homeless people she found along the way. Mazie was not a political leader or organizer. She didn’t work for a charity or a religious institution. She was just one person with a handful of change, but she still managed to make a big difference.

Mazie Phillips first captured the attention of New Yorker writer Joseph Mitchell in 1940 who introduced the Queen of the Bowery in an essay for the magazine. In her new novel, Saint Mazie, author Jami Attenberg revives the story of Mazie Phillips in fictional form, using her imagination to dive into the mind of this fascinating woman.

Mazie and her two sisters are the main characters in this book, and each one is fascinating in their own right. Jeanie, the youngest, is a dreamer and a dancer who escapes New York City to explore the country. Then there is her older sister Rosie who steals them away from their abusive home and parents. She is married to a gangster with a heart of gold. Of course, neither of them can really hold a candle to the charismatic Mazie. Despite the title of the book, the character of Mazie is really anything but a saint. She is outspoken, crude, bawdy with a tongue that would make a sailor blush. She’s definitely a little rough around the edges. But after only a few pages of Attenberg’s book, you can understand why so many men fall for her.

Attenburg’s novel is told through a series of diary entries and interviews, allowing us not only into the heads of those watching Mazie but also into hers. Before the Depression, she is mostly interested in partying, drinking and kissing every man that captures her fancy. But one day after walking past a breadline, she is inspired to do more to help the people around her. She knows the change in her pocket isn’t much to her, but it’s enough to feed a person and give hope. That’s what starts her crusade through those dark years. Mazie isn’t concerned about politics or debating what led to the Depression. Instead, her mind is always focused on the men she finds lying in the gutter. She tries to revive them with the promise of liquor or food. When that doesn’t work, she calls for an ambulance.

In our world, we always like to celebrate the big moments and the big achievers. But sometimes when we do, the little victories are lost. Countless people in that New York neighborhood owe their lives to Mazie Phillips. Like all saints, it is the stories after they are gone that keep their legacy alive. Mazie Phillips finally gets the recognition she deserves in Attenberg’s novel and reading Saint Mazie made me wish that more of the smaller saints among us could be canonized in the same way.