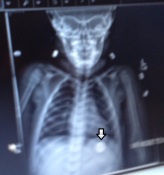 I was in the shower when this all went down.

There are two little kids in our family. My son is seven, my daughter is three. So it is fairly common for there to be a lot of noise in the house. Having shouts, arguments, and/or loud laughter (sometimes all at the same time) is the Southard norm. Actually, it has gotten to such a point that I get more nervous if things are quiet. That is truly when my parenting radar kicks in.

When I turned off the water and began drying off, my son was at the door, breathless. “She ate a penny.”

“Who did?” I asked confused.

The funny thing is that this penny wasn’t even ours. I can’t explain this but other kids always seem to be giving my kids stuff.

Last year, while my son was in kindergarten, he had a friend who was always giving him little things. He would come home each day with a new marble or little plastic army man. It got to such a point that I asked my son to tell his friend in no uncertain terms:  “Thank you, but please stop giving me things.”

It didn’t stop. Just a few days ago, another friend of his gave him 50 cents. My son was thrilled by this and happily asked if he now had enough to buy a Disney Infinity character (he is dying to get a Drax from Guardians of the Galaxy). The answer was of course no.

This penny was a special penny. A friendship penny.

My daughter and her little friend at daycare had spent most of Friday giving it back and forth to each other. And when I picked her up that evening, she told me all about the penny and how she wanted to keep it, never lose it. It was magic in her eyes. She carefully put it in her coat pocket until she could move it into a purse she had at the house.

Somehow, on Saturday morning, while I was in the shower, that magic friendship penny moved from the purse into her mouth. And, as my son explained it, she raised her head and he watched in shock as the penny slid down her throat.

Here is the thing, I had been looking forward to this day for over a month!

We were to be attending a game night with a bunch of friends, other parents seeking an escape from their kids, looking forward to being nothing more than adults again. Heck, I had even picked up Cards Against Humanity for the evening, relishing in the idea of saying inappropriate things (things I would never, ever consider saying in front of my kid).

This day was supposed to belong to the parents (we who sacrifice each day for their little lives, keeping them safe and well fed), and with one quick swallow and our 16th president everything changed. It was almost difficult for me to control my bitterness as I called the pediatrician and talked to a nurse.

Most parenting websites will tell you it’s no big deal really (of course, like most topics they are careful what they say, they don’t want to get sued. There is always a “but” in the sentences). Kids swallow things all the time! The issue is if it makes it into the stomach or not. For my daughter, she was complaining about her chest hurting so there was a fear it was lodged someplace it wasn’t supposed to be. The pediatrician told us to take her to the hospital. Since I was already showered and dressed, it fell on me to rush her to the ER for an X-ray.

As we were running to the door, my son stopped us and asked, “Can they look for LEGOs too?”

This floored me. “LEGOs? Did she eat them as well?” What was going on during my shower today?

“No,” he replied awkwardly. “I don’t think so. I just don’t want to lose any. Can you have them check? Just to be sure.”

My daughter sang and talked the entire way to the hospital.

Here I was trying to be calm, figuring in my head how this might change our schedule for the day, and she was happily telling me about what she saw on TV that morning. She only talked about the penny on two occasions during the drive.

The first was to tell me again how she could feel it and it hurt a little.

The second time was to explain what inspired her to put it in her mouth. “Daddy, do you remember the coin candies Baba gave us?” She was, of course, referring to Hanukkah coins, little chocolates covered in gold wrapping.

“But, honey, it is harder than that,” I said, trying to control my frustration around this. “It is clearly not like chocolate.”

“I know,” she said simply, “I thought it might have been gum though.” She did a deep sigh then. “It wasn’t.”

She sounded so disappointed.

After two different nurses and an insurance worker (with paperwork to sign), my daughter was moved onto a gurney, awaiting her time to get the X-ray. We were told it could be anywhere from 20 minutes to 2 hours, because emergency cases would get preference. Since she wasn’t gagging or having trouble breathing, we were in the later category. We were put in a room in the children’s wing, and told to wait.

Immediately and selfishly, I thought how two hours could slow down everything for our day. All of our plans! I was supposed to be at the store then, buying supplies for appetizers, maybe even a dessert. I was even debating if I should bring stuff to mix drinks (of course, they would already have stuff there, but mixing drinks is fun), and…then I really saw my littlest child sitting on a gurney made for a grownup.

This is the thing, we parents sometimes forget.

We  forget all the time how little our kids are, how precious. And, more importantly, we forget how things looked when we were that age. We get used to our kids, get used to them as little members of the family, forgetting almost what it means to simply be a child. The world is different to them. But, right then, seeing my little girl nervously sitting and not sure what to expect from her first real X-ray, I was overwhelmed by guilt.

At that moment, I couldn’t have cared less about my party.

I couldn’t have cared less about the drives, or being late, or anything else. None of it mattered. There was no place else in the entire world I wanted to be. I moved my chair closer to her bed and took her little hand in mine.

My daughter smiled, looked at our hands and back at the TV. It was on Nick. “I like SpongeBob,” she said.

“I like SpongeBob too,” I replied almost quietly, gripping her hand a little tighter.

We would watch two episodes until they came to get us.

3 thoughts on “The Penny in the Belly”