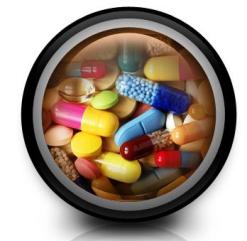 So there is a good chance that the pharmacist I worked for while in high school had a drug problem. Whenever he felt he needed to change “something” he would disappear down one of the drug aisles behind the counter, and a few pills later everything would be right as rain.

The pharmacy was located in a chain of grocery stores, so he had to be careful with his personal dealings. The more “monitored” drugs were located in a locked drawer at the front of the pharmacy, and one day when I was counting some off for a customer, he made a point of noting to me that if there was one pill missing in any of the bottles everyone would hear about it. It was a warning to me, but I also knew it was a reminder to himself to keep his hands off.

I never would have considered touching any of the drugs in the pharmacy, interest in that kind of recreational activity was never in my hardwire. I think at least the HR person recognized that from my interview and my reviews from my previous position. Mr. Goody Two-shoes. I was just not that kind of kid, probably making me one of the few teenagers who would be a perfect candidate to work at a pharmacy counter… unsupervised.

For two years before the pharmacy I was a bagboy at a different grocery store in the same chain, which meant bagging the groceries for the customer and then helping get them to the car. They were very personal and friendly stores. We were even given a list of possible conversational starters: sports, weather, local news (that isn’t too controversial). Definitely not politics or religion! Also, it was considered oddly rude to talk about a customer’s purchase, even if you just watched it rung up by the cashier and you put it in the bag for them. That was crossing the line. I still don’t get why that is true, but it feels right in my gut.

I kind of liked being a bagboy… 40 percent of the time.

Bagging groceries always felt like a challenge, a little game, trying to figure out how to fit everything into one bag without smashing anything or ripping it. The problem for me was with the other 60 percent. Which could include cleaning the bathrooms, mopping the floors and dealing with the empty cans and bottles.

The cans and bottles were the worst. Yes, even worse than the time I had to clean the bathroom walls after someone tried to do art on them with… I’ll let you use your imagination.

This was in the days before everything was electric so when a customer came in with a bag full of cans, it fell on the bagboys to not only count them for the customer, but to take them to the back room where they would be separated for the different can distributors.

To this day I can never consider drinking beer because of my time on that job. For there is nothing as gross as the smell of stale beer, and I would go home stinking of it on some days. The scent would linger on my store apron, stick to my hands, be in my hair. Just the idea of it even now makes me gag a little.

Yet, even though 40 percent is good for any occupation, at 16 I wanted something different. I was too young to be a cashier, so I began to apply for anything that would come in. One of my friends got transferred to produce, but after slicing off part of one of his finger on a devices back there, I decided that that department wasn’t for me (I always like to imagine that bit somewhere wrapped up with some finely cut watermelons).

When the pharmacy position came available I jumped at it. It took me away from some of my friends at the old store, but it felt so much more laid back. As long as the pharmacy agreed to work around my band and class schedules (I was the classic band nerd for three years out of my high school experience), how could I complain?

So my apron changed from tan to white.

I don’t remember the name of the head pharmacist, but if I close my eyes just right I can perfectly picture him.

Mr. P (which I will refer to him as) was from Africa, Nigeria I believe, and had one of those beautiful, almost musical accents you hear from that region. For someone with a Michigan slur, I would give an arm to have a beautiful voice like that. He would never talk to us about how he came to our country, what made him become a pharmacist. Strangely, talking about himself never really interested him that much; even though the rest of us would do it when he wasn’t working an afternoon.

He had multiple girlfriends. How he was able to negotiate this, I still have no idea. At one point, I was sure there were three (including one who called herself his fiancée). They would each stop by from time to time at the pharmacy, but very luckily never at the same time. And, I’m sure even if they did stop by at the same time, Mr. P with his very fast (and possibly medicated) mind would think up an excuse to explain it all.

I used to hate it when it was a slow day and it was only me and Mr. P in the office. And this was one of those small kind of branches so it was often. See, he was exactly the wrong kind of boss for a kid my age. He nitpicked everything I did and was always trying to give me advice about things from women to my choices in my life. For some reason he saw me as a project, something to correct and mold. He saw insecurity, where really I was just in my own head. And he liked to view his life as a success story I needed to follow the blueprint of (“Look at how successful I am, don’t you want to be like me?”). Sadly, usually all of his advice could be summed up simply by “Seize the day.” Yeah, he wanted to be the teacher from Dead Poet’s Society; he just didn’t stop to consider that maybe I was the wrong student.

I would make excuses when I worked with him to not be behind the counter for too long. I would dust the aisles with the over-the-counter medication for hours, losing time just straightening each and every bottle. I cannot imagine that there was another store with tampons so perfectly organized in a row as my store after an afternoon with Mr. P.

The branch was so small that there were only two pharmacists that worked it.

If Mr. P was all about getting the most from life, Mr. S wanted as little to do with life as possible. Oh, and just to make this even more clear, I will refer to him as Mr. S, because of the word “sad.”

Mr. S was in his early sixties and when he would wander into the pharmacy he always had his head down as if he had dropped his keys someplace on the ground… right next to his lost joy.

Mr. P would not stop talking; Mr. S would stand next to you for hours and now and then he might emit a deep sigh.

Mr. S and Mr. P rarely saw each other except when they were transitioning between their shifts. Strangely, they both seemed to enjoy each other’s company, even though they seemed so very opposite. Mr. P was the only one who could make Mr. S smile and he did it each time. He probably would’ve tickled him as well if it was appropriate. They were strangely like that.

I was one of three assistants whose duty was mainly acting as the gatekeeper between the pharmacist and the customer. I would collect the prescription and ring them up (which is odd since I was too young to be considered to be an official cashier; yet here I was doing that very thing at the pharmacy… with drugs and birth control items. Explain that to me!). Whenever Mr. P or Mr. S had to speak to a customer because the question was outside my realm, they would always give me a sideways glance as if I had let them down.

“Why didn’t you know the answer to that?” the sideways glance would say.

My response, which I always did my best to control them seeing, was “Because I don’t care.”

I knew my destiny, or at least I liked to think I did. I had written my first book at age 16 and even found an agent for it shortly after that. I was always thinking of my writing, and had been known to take some of the pads from the pharmacy counter and scribble short stories on the back of them while leaning over the front counter.

It was all about just waiting until my time was up each day and guessing what was up with each of the people that dared to approach our counter. Because, oh yes, I would try to guess what was wrong with each and every customer.

They were all little stories to me! Looking back it feels a little evil, but oddly very fun. And sometimes afterwards I would wander back to the computer to look up the medication or the prescription to see if I was right.

Yup, that is how my mind rolled and weren’t you glad I was there to help? Come again soon!

If you liked reading this post, why not check out one of my books? I’ve just had a book published collecting some of my most popular posts. It is entitled Me Stuff.

If fiction is more your thing, I’ve had four novels published in the last few years, A Jane Austen Daydream, Maximilian Standforth and the Case of the Dangerous Dare, My Problem With Doors and Megan.

You can find all of these books via my amazon.com author page here. Thanks for reading!