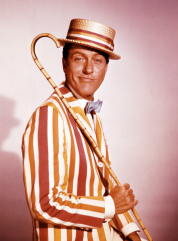 For the last six days I’ve been sick. I’ve had a fever that kept coming and going, a non-stop cough and I felt really weak. I slept away pretty much my entire weekend. Actually, my house has been the perfect storm for illnesses, with my son recovering from pneumonia and my daughter dealing with croup… but enough about them, let’s get back to me.

So while in one of my fever moments I started having a weird debate with myself.

Granted, this happens a lot but more so when a fever is included. And after one memorable (fever-induced) debate I have come to this conclusion.

Bert is the most tragic character in all of the Disney films.

Yes, I am talking about Bert, the lovable bloke from Mary Poppins. The one always up for an adventure and a song and dance. That Bert. And, yes, he is more tragic than Cinderella’s dad (who I still think was murdered by the step-mother) and all of the other lost parents in their cartoons (which is another good reason you don’t want your daughter to be a princess). Bert takes the cake and I carefully constructed this argument to prove my point.

This will not be a jolly holiday.

Bert is in love.

When Mary Poppins was in development, the author P.L. Travers argued that Bert and Mary could not have a relationship (You can see this acted out as well in the good movie, Saving Mr. Banks), but the hints are still there that there is affection, be it that it is only one sided.

Let’s say you are Bert and you are in love with Mary Poppins. Okay? What kind of a job would you have?

The first time Bert and Mary are reunited in the film it is outside the park with the chalk drawings. We all know this bit, they jump in for a cartoon afternoon. Once the kids run off, Bert immediately begins singing a song about how wonderful Mary is and how he loves her. (“It’s Mary that we love.”) If you think about the song in that context, it almost reminds you of a bad note you might have sent to someone in junior high. He is really trying, people!

Let’s jump forward, the next day Bert brings up his Uncle Albert who needs help (honestly, a scene that could have been cut from the film), floating on the ceiling and laughing. Anyway, Bert is getting her to spend time with him. He is still really trying, people!

The third adventure is, of course, on the rooftops. Hearing Bert talk about the world from up there shows his poetic and (dare I say) romantic heart. And when Mary leaves at the end, Bert asks her not to stay away too long.

Travers might have not wanted a romantic relationship, but it is heavily implied that at least one of the characters might have argued with her for it.

Mary doesn’t love him, and will never love him.

We never really know who or what Mary Poppins is. She is just Mary Poppins, the nanny. She is some kind of an eternal magical spirit. Kind of like a Santa Claus. (Well, much, much better looking than any Santa I have ever seen.)

Whatever the case, when you go back and watch the scenes between her and Bert, she is friendly to him certainly, but the sparkle he has in his eyes towards her, she doesn’t always share. Even when she looks back at the end at him, it’s nice, but it is not love.

Consider her response to him in the song “Jolly Holiday.” She does praise him “diamond in the rough,” but she also implies that he will never press his advantage with a lady. In other words: “You know your place, mister, keep to it.” Her response is almost calculating compared to his wooing.

She even shows hostility with him, look at the chalk drawing scene, she is almost annoyed that he is trying to take over her scheduled day. Yes, she takes part in the adventures, but there is also a hint of frustration there first with him. And that doesn’t change. We also see that annoyance around the visit to the uncle and with the chimney. Bert frustrates her.

I’m not saying that Mary is not capable of love. Whatever magical entity she is, she does feel it. Her umbrella points out to her that she feels that way about the Banks children at the end. And I think that is the extent her affection is supposed to begin and end. She is a magical nanny, she is not supposed to be falling in love with a grownup.

So why a tragedy? 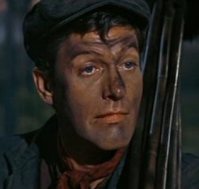 At some point in our lives we have all loved someone that didn’t return the feelings. It’s part of growing up and maturing. It makes us stronger…. If we can let it go and move on from the experience. But how do you move on when your heart’s affection is Mary freakin’ Poppins? How can you? I mean, not to seem belittling or anything, but everyone else would be just… normal.

So Bert does not move on. And even at the end of the film it is implied that he will still not move on and will wait for her again. Probably losing evenings after evenings, sitting on his rooftops looking for her cloud. Trying to figure out where and when she might blow in next.

The thing is that Mary Poppins will never age. She will always be young, but Bert will age. Each time he sees her it might be a little more difficult to dance, do that high kick with the penguins. Until someday, when he can’t even keep up in an adventure, or maybe misses one entirely.

Will Mary notice he is gone? She never sought him out in the film.

Would Mary even come and visit him on his deathbed? I don’t think she would consider it. She didn’t seek out friends during her visit with the Banks. She was just about them. It is really not part of her magical duties, she is a magical nanny. Period, that is it.

Bert will probably have his bed up against a window so he can look out. Maybe he will look out over the park trying to find her, or up into the sky, still trying to find her cloud. He will search for one last glimpse of her until his final breath, but if he is lucky enough to get it, chances are, she will not return it.

And that is why Bert is a tragedy, and possibly the greatest Disney tragedy, for he will be (and is) spending his entire life chasing after a dream he can never have. He is the one Disney hero who won’t succeed. He will never settle down, never move on, never find the peace he wants. He will never get that spoonful of sugar… I think you know what I mean.

In the song “Supercalifragilisticexpialidocious,” Bert gives us a brief insight into his childhood. He says in the song:

Because I was afraid to speak
When I was just a lad
My father gave my nose a tweak
And told me I was bad.

Afraid? Why was he afraid to speak? What would happen if he did? Or if he said something wrong?

It can be implied that Bert as a child was shy and sensitive, and it sounds like he had a very rough childhood with a possibly abusive father.

Now imagine that moment when that quiet young Bert might have first met Mary Poppins. Maybe he saw her at a park with some other children or maybe she came to help him? At that moment, right there, he probably felt more special than he had ever in his entire life. It must have been like turning the corner on a street and bumping into an angel… and that angel knows your name.

It changed him. For good or bad, Bert saw magical possibilities that many of us could only dream of. The tragic thing is Bert was not able to move on from that moment. The Banks family did (they flew a kite), Bert can’t.

So that is why I weep for Bert. And while I still debate whether he had worked out the dance and song with the other chimney sweeps ahead of time for Mary or not (he probably did), there is more than enough proof  about how he feels about Ms. Poppins.

He will never let his Mary go. Indubitably.

If you liked reading this post, why not check out one of my books? I’ve just had a book published collecting some of my most popular posts. It is entitled Me Stuff.

If fiction is more your thing, I’ve had four novels published in the last few years, A Jane Austen Daydream, Maximilian Standforth and the Case of the Dangerous Dare, My Problem With Doors and Megan.

You can find all of these books via my amazon.com author page here. Thanks for reading!

7 thoughts on “The Tragedy of Bert”