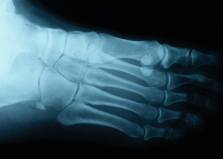 I know my wife will forever love me because of a toe.

My wife and my relationship was always a whirlwind, definitely something that some of our more conservative friends and family would wonder about, never daring really to say anything to our faces (and if they ever did, chances are, we probably would have laughed about it later). Of course, knowing both or our personalities, it was not surprising that we would be so serious, so quickly. And in a matter of months, my future wife was living with me in an apartment in Los Angeles.

My wife and I are both from Michigan, but didn’t meet until we were both far from that state. Through a mutual friend we immediately hit it off, our personalities perfectly in sync (with enough sarcasm included for the spice). The passion and drive I have for my writing and literature, she is mirrored with her own artform, dance.

I’m one of those lucky enough to be married to my best friend.

Our apartment, our first home, was located in Koreatown, off of Wilshire, nearby the old Ambassador Hotel, which at that time was still standing, but a shell of its former glory. I used to explore the history of it online and tell my future wife about the celebrities that once walked its halls, performed, and partied. I always liked to imagine it filled with partying ghosts in that legendary Coconut Grove while a jazz band played. Some claimed to hear the band while walking past the building, but I never did sadly. I just found the empty and lost history of it fascinating. It could have been such a massive tourist trap if presented right, but no one seemed to care (Los Angeles was moving too fast to ever consider looking back) and today the building is gone.

I have always felt a little guilty that my wife made the move to Los Angeles, as compared to me joining her in New York City. New York is a hub for dance, and she was surrounded by some of her favorite choreographers and dance companies. Los Angeles really didn’t offer that for her. All that Los Angeles offered for her was me.

And, I am still shocked that it was enough.

To make matters more complicated, we had a roommate in our two-bedroom apartment. My younger brother was in the next room. He was one of our strongest supporters in those early days of our relationship, and, as time went on after my wife moved in, I began to suspect that my brother enjoyed hanging out with her more than me. Quickly pushing aside a brother for a much cooler new sister.

My wife had a few friends living in Los Angeles before the move, but the change in her life would have stunned anyone. She was working retail at the time, so she also had to get used to a new job, as well as that whole new life thing and me. Sometimes I would fret if she was as happy as I wanted her to be, always feeling guilty (and a little worried) for what she lost in the move. Would a day come where she would throw in the towel and run back to an existence that seemed to match her lifestyle better?

Also, to add to the weirdness of those early days, I think the landlady’s husband had a crush on her, which could sometimes make our entry and exit out of the apartment awkward… Well, at least for me. It would make my wife laugh. Sometimes I suspected that he waited for us, just to catch a glimpse of her.

During one of my wife’s first weekends in Los Angeles, we decided to go to the beach. Looking back I think it was my brother’s idea, but I wish it was mine. We found this private area near the ocean and laid down the blankets.

I remember the water was cold that day, but it was beautiful and the sound of the waves were very soothing. It is really not surprising that some listen to that sound while sleeping at night.

My wife was relaxing on a blanket looking at a magazine as my brother and I played Frisbee. And everything was going so great until the toe incident. (Yes, I consider it an incident.)

Honestly, I was trying to show off for her. I knew she was looking at her magazine and relaxing, but I still was being a little too dramatic on the beach. Flamboyant some would call it. A jump here, a run there… It was all very impressive until I smacked my toe on a rock and fell to the ground in a very ungraceful manner.

I have never been the kind of kid who had dealt with much pain.

I did break my wrist once in second grade. I got that injury playing on a neighbor’s jungle bars. I clearly remember one of my neighbors telling me to be careful and not listening. There is justice for you! Listen to your elders! I had to wear a cast and that was kind of cool. My teacher at the time had me stand in front of the class and tell how it happened, and then each of the kids in the class wrote their name on it.

I once was hired to be in a commercial as a kid where I was to pretend to play baseball. The idea was I hit the ball winning the game and then the family takes me to a local family restaurant to celebrate. Well, on the day of filming a part of the set fell on me. I don’t know if it hurt, but I do remember being shocked by the impact of it. I think another kid took over the gig, but if the commercial ever aired I don’t remember it.

And I was never the kind of kid to get in fights at school. There is only one I can even really remember, but it ended quickly. The crowd around us were on my side (that boy was a jerk) and there was a certain rush as the kids cheered me on. But in a matter of seconds, the teacher on the playground was there, separating us and taking the both of us to the principal’s office.

My dad used to get injured all the time when I was growing up. He would bike to work each day, and I remember a lot of casts and broken bike helmets. Now I bike all the time, but I have yet to have any of his bad luck.

I complained about it. I limped. I hopped like a soldier missing a limb.

My wife and brother both casually debated if I was going to lose the nail, but my adrenaline was racing, asking what I should do.

Should we go to the hospital? Would I need to miss work the next day?

I am usually a pretty fast talker on a normal day, but in this state I was like on speed. My eyes were racing from one to the other, looking for some answer to what destiny had just done to me.

Now, my wife suffers through pain every day as a dancer. Sore muscles, achy bones. I remember the first time she asked me to help crack her back, and wondering with shock if I broke her when I heard the snap. She has even had experiences performing on broken toes and no one in the audience even guessing the pain she was going through. She suffers for her art like no other artist I have ever met.

I am the opposite when it comes to pain, however, and that clearly became evident on that day.

My reaction was definitely less than manly and some would have run for the hills, maybe even all the way back to New York, not imagining such a person being a good match for anyone. I was a twenty-something year old child that needed pampering and this is who she decided to spend her life with? Really this guy?

When we got back to the apartment, I took over our couch, raising my foot on a bunch of pillows, putting on comfort movies, and changing the ice every so often. Everything I did was over the top and just embarrassing, taking almost five minutes, for example, to hobble from the living room to the kitchen, maybe even leaning on the table for support part of the way there. You would think I was recovering from a major surgery.

Through my silliness, my amazing wife was there. She didn’t leave me. She sat in the living room with me, reading, and sometimes watching the television. She would answer my questions about injuries. She even told me about her own experiences, as we passed the rest of that day.

No towels were thrown.

To this day, if I mention my toe, my wife will give a little smirk. (If there is a laugh there, it is hidden.) She did once admit to me that it was hilarious how I fell to the ground, probably looking like something from an old silent black-and-white comedy film.

I always imagine it looking like a pink flamingo that suddenly trips with a flamboyant thud. Wings flapping wildly about and squawking.

I think I limped for a few days later, and even though my toe has never been the same since then, I don’t mind. In many ways, that toe gave me security and a piece of mind about our relationship that I didn’t have before my fall.

We’ve been married for over eleven years now and have two beautiful children. I still have all of my limbs, and we will always have each other.

I know this because of a toe.

If you liked reading this post, why not check out one of my books? I’ve had four novels published in the last few years, A Jane Austen Daydream,  Maximilian Standforth and the Case of the Dangerous Dare, My Problem With Doors and Megan. You can find them via my amazon.com author page here. Thanks for reading!

3 thoughts on “The Importance of a Toe: A Love Story”