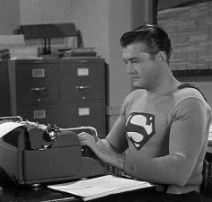 Superman was always my favorite superhero. There was always a lost operatic elegance to his story in my opinion. Yes, he saves cats from trees and helps old ladies cross the street, but he is alone among us. One of us, and yet not really one of us. A lost relic of another world, another time.

See, Christopher Reeve had Superman be the real person and Clark Kent the performance, but more recently, TV shows like Smallville and Lois and Clark had it the other way around. What does that mean really? Everything to the character, little to us in the real world, of course. Our boring and drab reality where men don’t fly, and magic and superpowers only survive in our imaginations.

I’ve been thinking a lot about superheroes over the last few years. Mostly that is because of my son. The one nearby me as I write this, wearing Justice League PJs, Star Wars slippers, and holding a Superman toy from the film Man of Steel. He is five.

He loves superheroes and together we have learned a lot about them. He, because of his curiosity; me, because I have to keep up and be the all-knowing father. You know the one. He usually gets snuffed out in the first chapter of every superhero origin story.  That’s me- Pa Kent, Dr. Wayne, and Martin Jordan, crashed pilot, all rolled into one; always looking behind my back wondering if today is the day I tragically disappear and my son takes that step forward to being a true superhero.

This is reality, of course, and I am fine, and my son wants to see more. He knows he can’t watch The Dark Knight trilogy, but he likes to look at the cases and ask questions.  And right now everything around the world is about the new Superman movie, Man of Steel.

I am to blame for most of my son’s excitement around Man of Steel.

I really, really want to see this movie.

I remember seeing Christopher Reeve in the first movie and watching him fly, and I also remember being disappointed by the third lame film in his series. Seeing movies as a kid, superhero or non, was always a big deal for me and my summers; and when I look back, they are each earmarked by the unique escapes to the cineplexes that year. Some years are wonders for me, like each of the years there was a new Star Wars film, or the blessed year we had the third Indiana Jones and Tim Burton’s Batman! That, my friends, was the summer of legends and I was the perfect age to experience it in all its glory.

My favorite summer movie story comes at the expense of my brother. I saw Jurassic Park on opening day, and convinced my parents (lied to them) that it would be fine for my little brother. I argued that he would love it because he loves dinosaurs. It was so smooth (like all good, evil pranks are).

Do you remember the scene when the Dilophsaurus (thanks Wikipedia!) shook it’s neck and shot venom at the guy from Seinfeld? At that moment, I grabbed my brother!

I got in trouble when I got home, but his high-pitched scream in that theater was worth it.

The point is I want to give my son a legendary moment in the theater (without dinosaurs and screaming). Yes, something that may, for a time, make him forget our reality and imagine a different world, dream. Pure wonderful addictive escapism.

The problem is that those of us who grew up on Superman are now adults and we expect the character to grow with us. We want realism, we want pain and we want things that go boom and scare us; forgetting that back when we watched Super Friends on Saturday morning it was rare that Superman even punched anything.

Yes, the Super Friends fought bad guys, but between adventures they would also show us how to make masks out of milk cartons. I don’t see the new movie attempting that.

It’s almost unfair what we adults are taking away from kids. Some might even consider it selfish. Heck, I consider it selfish, even though I play video games like Injustice and Batman: Arkham City which are filled with superheroes and far too advanced and violent for a young child to play, let alone watch.

So I’ve been running through the list of casualities my son has experienced so far.

It’s fascinating when you step back all of the carnage our children experience in our stories. It sometimes makes me wonder exactly what I am trying to protect my son from.

See, my son does know death. My grandfather, his great-grandfather (who we all called “Head Rooster”), passed away last year. My son is named after the man, and he also was at the funeral. Since that event, death comes up in conversations from time to time. He might also pretend to be it, when wrestling or when a battle with lightsabers had gone too far.

My trick for getting through these conversations is honesty and also describing life as a story. Head Rooster’s life was like a long book, a big book, and it just came to an end, but my son is at the beginning of his story and just look how many pages there are left to go… and usually then we will discuss what is ahead. At the time of this writing, he wants to be an astronaut-writer-daddy. In other words, he wants to go to Mars, write about it, and then be a daddy.

A few days ago, after weighing the pros and cons over and over again, I just decided to ask my son what he wanted to do. I sat him down in a chair, showed him the trailer for Man of Steel again and asked him if he wanted to see the movie. I explained that it might be scary in parts, also might make him sad; and throughout he listened, he really listened.

Finally, after thinking a moment, he smiled and nodded. “It’s not real,” he said.

“If it was real,” he replied simple, “I would freak out.”

I think we all would… especially the adults.

If you liked reading my article, why not check out some of my published books? I’ve had three novels published in the last few years, the new A Jane Austen Daydream, Maximilian Standforth and the Case of the Dangerous Dare, My Problem With Doors and Megan. You can find them via my amazon.com author page here, or Doors and Megan as an eBook on Google eBooks here. Thanks for reading!

8 thoughts on “The Conundrum of Men in Capes”