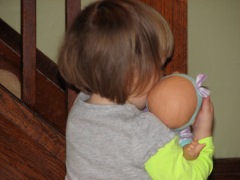 Sentimentality runs thick in my family. It has always been that way, carrying on that tradition from my parents to me. And when a holiday or family event arrives at our door, the past always arrives with it, shaking the snow off its boots, an escapable addition at the table.

Every Christmas tree is compared to a past tree, every gathering being a moment to remember those no longer there, and birthdays are always tainted with the feeling of a time gone that will never return.

This is not a bad thing.

In a way it adds to my family’s experiences along this mortal coil, since we view time and moments in such a special light. So at any event, look for me with the video camera trying to chase something down that can’t be chased down; the elusive kernel of a pure, real instant.

Every giggle, every dance, every story of my kids, I want to capture it, knowing that someday, with my sentimentality sitting beside me on the couch I will want to view it again… and again… and again…

That time that is just about to slip away.

When my wife and I got married that was the plan.

Growing up with a love of children’s literature, it makes you look at childhood with fogged glasses of the reality; focusing on the magic as compared to the dirty diapers and late night feedings.

So when my son, my first child, was being planned, I was already there; painting the room, buying toys, filling an entire bookcase with books (I even had a system, the books get more complicated as he gets taller and could reach them). My wife had to remind me a few times to slow down, maybe he might want a say in a few things.

But when we found out we were going to have a daughter for our second child, I was at a loss.

Strangely, my initial thoughts were always around what I didn’t want my daughter’s life to be.

Over time, as the date for her birth got closer and closer, I began to imagine her more and more as Scout from To Kill a Mockingbird. That’s not to say I was imagining myself becoming Atticus Finch (I’m cool, but I am NOT that cool), but I saw her in overalls, not afraid to get in a fight if it was something she was right about.

A leader. Strong. Smart. (Three things it turns out that I predicted correctly about her.)

I even argued for the name Scout for a time. I lost that battle.

My daughter is turning two.

Which means my second child, the last child I will have as a parent, is leaving the realm of babyhood far behind.

Yeah, I know she has been technically a toddler for a while (and considering the fact I can have conversations with her about things shows that), but she still is my baby in my mind.

Maybe it is me trying to hold onto that moment in my life as a parent. Not wanting to let go of that experience of “firsts” as I say to her all the time that she is my baby.

She gets a big smile and then says with a point at herself. “Me.”

It is then that I give her tickles until she tells me to stop… and then we start the game again.

A few months ago my wife and I made a mistake with my daughter. It is a mistake that continues to haunt us each and every day. Parents everywhere should take note.

Don’t show a toddler that you can look up pictures of toys on your computer.

For my daughter it is Cabbage Patch Kids and each time I turn to my computer to check my e-mails or update my Facebook, I can hear her behind me; my daughter moving a big chair over (all by herself) to join me at the computer. She then pulls herself up and points at the screen in front of me, declaring: “Babies.”

Then I sigh and say, “Okay, we’ll look at two babies and that is it.”

She puts diapers on them, takes them off, sleeps with them, dances with them, and when we celebrate her big birthday she will get one (the very one she likes looking at the most on the web).  Her reaction is going to be awesome.

Yet, I know that when we celebrate this moment, and she opens that present, she may be getting a baby, but I will be losing mine, replaced by the little girl who likes to color with markers and dance to Pete-the-Cat songs. That time in my life will be done with the blowing out of the candles on the cake.

You see what I mean about sentimentality?

Let me get my camera…

If you liked reading this post, why not check out one of my books? I’ve had three novels published in the last few years, A Jane Austen Daydream (to be released on April 30), My Problem With Doors and Megan. You can find them via my amazon.com author page here, or as an eBook on Google eBooks here. Thanks for reading!…

12 thoughts on “The Historical Resonance of Turning Two”