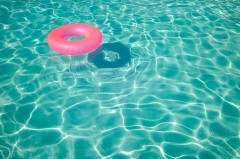 I grew up with a swimming pool. My grandmother also had a cottage that was on a lake perfect for swimming. So you would think I’d be pretty used to water, maybe even brave around it, with amazing diving abilities and incredible endurance.

When I get into water, it is like watching an old dainty woman with a hairnet covering her blue hair slowly easing her way in, inch by inch.

Maybe it’s the shock of the change in body temperature, but it has never felt natural to me and because of it all of the mad skills I should have (surrounded by water my entire life) is lost on me. I do not flip when I have to jump in, I plummet.

So in other words, I am not prone to plunging into anything.

Recently, I had the pleasure of having one of my articles from this blog shared on The Passive Voice (here), and for those that don’t know the site it is a very popular writing resource and forum for authors of all styles. The article that was shared was “What I Learned From Having a Literary Agent” (you can read it here). It all began so innocently, a nice surprise in the middle of a trying week.

Well, that was how it started…

Soon some were taking, what I considered a very harmless article, personally! It was almost as if they were insulted that I was still standing by the established corporate structure around publishing. One said I had “Stockholm Syndrome” since I said I would consider an agent again in the future; and another crossed a line asking if I would want my daughter to be in a relationship like that.

Yeah, I’m serious… people wrote this stuff to me, and some of it was worse.

Well, besides all of these discussions around agents (and my lack of sense of reality) there was another theme emerging in many of the posts. It was more than emerging, it was screaming at me:

While I would love to be a mainstream writer, and still sometimes dream of great literary successes (I used to fantasize about taking on Stephen King on Celebrity Jeopardy and wiping the floor with him), I do recognize all of that is… well… a fairy story.

The fact is where I seem more at home is outside of the mainstream, usually working with indie publishers, who I find typically to be just like me—Readers, lovers of books, and writers who want to do something new in storytelling and support new voices in literature. They want to find the hidden and lost gems, and in many ways, that is how I like to think of my books.

However, the more attention my blog and my writing articles get, the more I realize that I am starting to hit a wall in today’s writing world and this experience with The Passive Voice showed me that in spades.

When so many writers care so passionately about self-publishing and choose to do it over even considering trying to find an agent or publisher, how can I speak to them if I can’t say that I have had the contemporary self-publishing experience?

As much as I wanted to tell each of the posts on the site they were wrong (especially the ones questioning my intelligence), I couldn’t because I didn’t have a leg to stand on.

MAXIMILIAN STANDFORTH AND THE CASE OF THE DANGEROUS DARE is not a normal book.

I wrote it around the time I was with the agent in question at about year 3. At the time, my agent reviewed it, said she liked it, but decided to keep pushing my novel MY PROBLEM WITH DOORS. So MAX joined MEGAN (and later A JANE AUSTEN DAYDREAM) in the file cabinet of “waiting works” from that period.

When I discussed Max previously on this blog I called it “My Mad Genius Moment” and in a way it was (you can read that post here).

It is my creativity unhinged, exploding on the page. I wanted to see how far into my imagination I could go in a story, no holds barred, and I did that on every page. Starting with a premise of a period mystery (with foggy carriage rides, giant haunted castles, and horrendous deaths), the book slowly turns into something completely different. By the end, everyone feels a touch of the madness. I remember there were times when I was working on it that I even began to question my own reality, wondering if I was truly ever awake, pinching myself from time to time…

Yeah, it is a trippy book in a way, and to be honest, I adore it.

I know, I know…  all writers love their books, and I do, I seriously do… but there is something about MAX that just makes me smile each time I think of it.  Maybe it’s the sheer creativity, the inspiration, or the complete disregard for normalcy in it that just makes the mad genius writer in me giggle maniacally.

Whatever the case, MAX is not a normal book and in my heart I know that no agent or big time publisher is going to come running to grab it anytime soon, no matter how much I promise that readers will have an experience unlike any other book they may have read before

I have no idea how to go down the self-publishing road successfully (with my mad wonderful book) so I needed a guru to start the process. I found that in Rebecca T. Dickson (You can visit her website here to learn about her services and career, or try one of these links: “Fear I want to write but” and “Who the hell is Rebecca T. Dickson?”).

Rebecca is an editor and author and is a strong advocate for self-publishing. So why did I reach out to her to help?

Well, when A JANE AUSTEN DAYDREAM was released by its original publisher (I am, of course, happy to report that it has a new publisher and I could not be more pleased), she wrote a review for that draft on amazon. While she heaped praise on the work and my writing she only gave it four stars.

Only four stars? What? After all that praise? Only four?

I had to find out why, so I tracked her down in my list of Twitter followers and sent her a direct message. Her response to me was that she couldn’t give it all five since she was not impressed with the editing work on it. Yeah, she took a point off for editing (!) and had no problem telling me; going so far as to point out some of the things that she noticed.

Man, that impressed me! To say that to the writer? That kind of bold honesty… awesome. (Oh and for those curious, the book is being edited again before its new and better release in April 2013).

Anyway, when I told Rebecca about this idea around my mad MAX she jumped on board, wanting to read the book and work on it ASAP. I have even already received her first batch of notes and I am already impressed. No matter what happens from this point forward, it is going to be a clean book.

And with that first step, my toe is officially starting to enter the cold water.

I don’t know how this will turn out.

I don’t know if a book like this (while fun and surprising, it is unique, don’t get me wrong) can even work in this kind of market (or even work in print at all); but, like with the experiment of writing Permanent Spring Showers (my real-time novel available for a limited time here), I like to try new writing experiences.

Live all of the possibilities our artform has to offer.

In the very least, this experience will give me something to point to the next time I am confronted with a bunch of my fellow authors questioning the decisions I have made in my career. And over the course of this “adventure” I plan to continue to write posts, giving you my honest feeling about the experience, step-by-step.

So how am I feeling right now you may ask?

Well, I feel like a child again, standing on a diving board, wondering how cold the water is and if I really want to jump in. I’m nervous, and yeah, I’m skeptical that this is the right decision for me and my books.

14 thoughts on “My Adventure in Self-Publishing: Taking the Plunge”