This film comes out on Blu-Ray this week and this is my initial response to the film (which is great). My daughter is only 18-months old and is obsessed with Princess Merida. She has a toddler doll of her and walks around with it, calling it her baby. She runs her hands through her hair, gives it kisses, sleeps with it each night… Yes, it is all very cute. The day I show her the film and she realizes her “baby” can walk and talk too, her little mind will certainly be wowed. 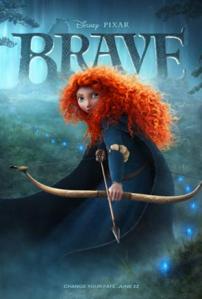 This discussion/review is filled with spoilers so if you have not seen Brave… Well, go see it, it is great.

I’m not sure whether to compliment the marketing division at Disney or scold them, but Brave is not the movie they were selling to us. Oh, it is a good film, and I really enjoyed the trip, but it’s not the film I felt like we were seeing in the ads.

Yes, there is magic, there is the princess with the bow, there is some adventure in the end, but it is not on a grand magical stage. If anything the film seems smaller than all that, and even seems to decrease in size over the picture, since we keep returning to locations we have seen before, again and again.

Yes, in many ways, Brave is a small  and personal film, with only a small cast dealing with an issue…