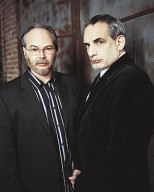 So often when you speak to married couples you hear of the sacrifices that they have given for the sake of the marriage. Bad habits disappear, strange heirlooms from the past go into storage.

Luckily, for me my wife really married me for who I was and didn’t expect me to change…

She did want one thing.

My wife hates the music of Steely Dan.

“Reelin’ in the Years”

I grew up on the music of Steely Dan. My dad loves this band, I can’t remember a time really when Countdown to Ecstasy or Pretzel Logic wasn’t playing while he was working in the lawn or around the house.

Over a decade ago I actually got him tickets to see the band live. And when he injured his leg, I gave him copies of their entire discography to help pass the time. They have always been a go-to possibility around my dad and presents… Other than Steely Dan and the work of Kurt Vonnegut, he is difficult to shop for, to be honest.

I’ve seen Steely Dan live myself; it was after my brother and I started living together in Los Angeles. Now while I felt like the concert was the equivalent of just pressing play on a CD (in other words, they did not make any changes to any of their songs) it was also strangely like visiting home hearing Donald Fagen sing all of those hits we have heard our dad hum for years. It held back the homesickness of being 3000 miles away for a few days easily. Yet, when I look back all I can remember from that evening is how outrageous the ticket prices were and that their concert shirts were the most shockingly expensive t-shirts I have ever seen (seriously, they were more expensive then shirts at a Paul McCartney concert. And that is freaking Paul McCartney!).

Oh, and the title of my radio series, Time Out Of Mind (here), comes from the title of their song, as well as the inspiration to use dragons (mine being real, as compared to theirs). So I owe them that spark of creativity.

For me, what drew me to Steely Dan were their stories. Their songs are not your typical tunes you hear on the radio. A majority of their music is filled with characters like you would see in a ripped and old dubious paperback collection of short stories- from gangsters to druggies. One of my favorite songs of theirs is “Don’t Take Me Alive” a rocker of a song told from the perspective of a desperate criminal held up in a building shouting down to the cops who have the building surrounded. Or how about “Hey Nineteen” which is about an older gentlemen unsuccessfully trying to have an affair with a younger woman? I could go on and on, story after story, questionable narrator after questionable narrator.

Whatever the case, whatever the song, desire seems to be the key to their work; each song has a character desiring something (good, but usually bad) that is out of reach. From drugs to love to simply a better life, each character is dreaming and the songs usually capture that moment of desire not really ever telling the end of the tale; leaving the rest to the imagination of the listener. A better way to think of them is that they are little character studies, and as a writer I have always found that fascinating about them. The only other band I can think of like them that tells stories in this fashion is Belle and Sebastian, but it is never as consistent as Donald Fagen and Walter Becker.

And on a side note, it’s always made me sad that Donald Fagen’s last name has an “e” instead of an “i.” I would love for it to be spelled like the name of the character from Oliver Twist. I mean, come on, wouldn’t that be totally fitting?

“No, We Can’t Dance Together”

When I bring up Steely Dan, my wife usually makes a face. It is the face she uses when something burns on the stove or we have to change a very bad diaper. She has even been known to make a grimace sound, something she doesn’t even do for the diapers.

One of the things that first drew my wife and me together was music, both having a love of jazz (I remember the first time she scolded for spelling Mingus wrong) and The Beatles. Her family is from a region near Liverpool and her mother claimed that she saw the Beatles at the Cavern Club. How cool is that?

My wife is a modern dancer and choreographer and she has argued in many instances that one of the best things about being married to me is my music. She raids my music collection for dance pieces all of the time… Just not Steely Dan.

Steely Dan is not part of any shuffles and none of her dancers have ever taken even a step to them.

The funny thing is how her distaste for their music has affected me. I have all of Steely Dan’s work on my iPod and I will listen to it from time to time when I am writing or at work, but strangely I feel something different when I listen to Steely Dan now, two things actually.

One, I feel guilty.

Can you believe it?

Like I am doing something sneaky behind her back. Now, I know, she wouldn’t care if I was listening to their music when she is not around, but yet, I still feel it. Also, I have noticed another change, but this one is more prevalent and I can’t blame her or anyone else. It’s all me.

I’m not feeling the music anymore.

“Drink Your Big Black Cow and Get Out of Here”

This is not the first time I’ve fallen out of interest when an artist.

When I was young, for example, I used to love Paul Simon and Simon and Garfunkel. Like Steely Dan, I had all of their CDs, even seeing Rhymin’ Simon in concert when I was in high school. But for the last decade I haven’t listened to a single one of his songs. Almost surprisingly, they are not even on my iPod.

The best way to explain it is it’s like eating at a brunch and becoming full; it’s that feeling. I have eaten enough of Simon, I am ready for something else, please.

Maybe that is what has happened with Steely Dan, I’ve reached the end of their brunch, and my wife played the role simply of the waitress giving me the tab. The meal, frankly, was going to end sooner or later.

This is all not to say I won’t check out any new music from Steely Dan, but considering how much time they take between CDs, it might not be really an issue. Their last album was in 2003, so not a problem. They have their own schedule, and right now it is about the occasional solo record and a lot of touring.

Yeah, I’ll probably buy that future CD for my dad, and I’ll probably listen to it as well. Maybe it might even end up on my iPod.  But it’s all different now. Is this part of maturing? Growing? Or being part of a very healthy marriage?

Or, maybe, this is just proof that my wife has won a poker game I didn’t know was going on… Sorry, Mr. Becker and Mr Fagin… I mean, Fagen.

She has the better hand.