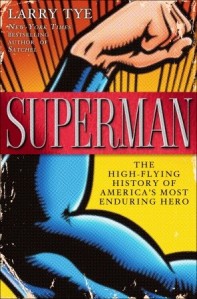 I am the father of a four-year old obsessed with superheroes. And while I am always a little nervous that all of these characters seem to have fathers that meet untimely ends (How can a dad not squirm at that thought?), I have no problem playing with his toys with him and watching his shows.

This late-in-life dip into superheroes has come up with some fun discoveries for me—like GraphicAudio’s amazing radio dramatization of comic books, which I discuss here and here—as I become more and more an unintentional expert in the field of all things with capes.

Superman by Larry Tye is a wonderfully-written nonfiction account of the history of Superman from his birth to most recent times. The book is expansive, not happy with merely talking about his creators or the interesting actors that have portrayed him over the years; showing all of the impacts that the character has had on our society (religion, culturally, etc.) and his own changes as he evolves and gets retooled again and again for new generations.

This is not a simple or playful introduction, but a celebration of an icon and all of the people that made his flight possible.

One of the things that really impressed me around Larry Tye’s book is his research into the inspiration behind the character of Mr. Kent.

Yes, we get the story of Jerry Siegel, the young upstart who gave birth to a hero, someone he once dreamed that would have saved his own father after a robbery that took a turn for the worse; but there is so much more here in Tye’s book, so much more.

Through Tye’s investigation you get a look into the works that influenced Siegel, from the outrageously (and possibly legally questionable) obvious to the minor. In a way, Tye gets into Siegel’s head (the conscious and subconscious) and it is a revelation to watch an insightful writer like this walk you through each of the “steps” that led to the spark that became Superman.

As a lover of creative writing, I found this amount of details wonderful, making this book more than just an exploration on Superman, but a possible recommendation from me to other new creative writers. You want to see how an idea gets conceived and the process around it? Here is a great example of the process mapped out perfectly for you.

For a story about a superhero that can always save the day, it is fascinating how many tragic stories are hidden under the giant S.

From Jerry Siegel and Joe Schuster’s legal fights after being so unfairly hoodwinked into signing away the rights to their flying baby (which can’t help but make a reader fume each time it comes up and another hurdle is thrown in their path) to the end of George Reeve and Christopher Reeves, Tye discusses each aspect around the history.

Some say there is a Superman curse, I don’t think there is that. Yes, there is misfortune for some, but a lot of the issues seem to stem from greed more than the fingers of a dark fate.

One of the deliciously evil characters that emerge in this history is Harry Donenfeld, a pornographer who would do anything to add to his bankroll, from swindling family members to convincing people to take the “fall” for him in legal issues. Harry oversaw Superman, collecting the mountain of cash that should have been rightfully in the hands of the creators. From mistresses to shady business dealings, the fact that such a man actually existed in reality and isn’t a creation himself is amazing to me. Each time he appeared in the book it was like driving by a car wreck, I want to look away, but I can’t, gothically fascinated to see what happened.

A Hero for All Medias

This book is filled with nice surprises. For example, so often in today’s pop culture we forget about radio drama and the impact it had back in its heyday. People didn’t have thousands of options like viewers do today with cable, and a popular radio show had the power, unlike anything today, to influence the masses.

Tye gives radio its due, not only introducing us to the makers behind the Superman radio show (and the influences these scripts had on the growth of the character as well), but also the cultural impacts the radio series attempted to have, even once famously taking on the Klu Klux Klan.

Tye in his writing shares the successes and failures of each of the attempts at presenting the man of steel. From the issues in the early years of cinema and television in making him fly to the cheese factor that would become Lois and Clark, each aspect of this hero gets his due. So, if a reader is interested in only a certain version of the hero, this book will discuss it and there will be new insights in the telling, making this a book for all of the different fans of the man of tomorrow. As I said, nothing is missed.

Yet, it’s sad to think such a wonderfully written book could be soon out of date as new movies and new versions of the character spring out each year. I hope Tye will get opportunities to update this work from time to time, I can’t imagine a better book being created around this icon.

For me, I discovered Superman and his mythology through the Richard Donner film. And while I thought the presentation of Lex Luthor as silly in the film (and still do), there was a grandeur to the Superman myth that really awed me. And I can’t help but be sad sometimes, usually after reading too much news, that there really isn’t a Superman out there…

If you liked reading my review, why not check out some of my books? I had two novels published in the last few years, My Problem With Doors and Megan. You can find them via my amazon.com author page here. Thanks for reading!