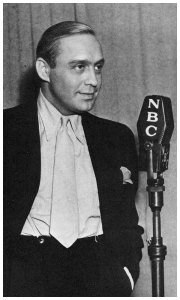 I first discovered Jack Benny by chance. I was about 11 and while playing with a cheap little radio in my bedroom, I discovered an AM station that was playing old-time radio shows. With my young imagination, I first imagined that I had somehow tuned into the past.

Right there, on my radio!

I began to wonder if there was a way I could transport more back to then. (On a side note, if I could go back now I would write the screenplay for Casablanca; bad of me, I know) Could I communicate back? Could this mean something more? Was this the start of a wacky adventure starring me…

Naturally, I then remember the disappointment when the first local radio ad played between some episodes. Yet, reality was not enough to deter me from listening more.  I was first fascinated, and then slowly hooked.

I started buying blank tapes, filling them up day after day with anything they were playing. Before I stopped I had almost a hundred tapes with everything from The Lone Ranger to The New Adventures of Sherlock Holmes to The Jack Benny Show.

It didn’t take long of me listening to radio episodes to grasp the structure of The Jack Benny Show. Growing up on TV sitcoms the structure was not foreign; Jack Benny created the mode, making him a lot more groundbreaking in his radio work than people might realize. If you start from the early radio episodes and move forward, you can see the beats of what would be a TV sitcom find its niche. It’s not surprising to consider than how easy it was for many radio stars to abandon the airwaves and move to the boob tube. And that was thanks to the work of Jack and his writers.

Usually, I am very drawn to creativity, which always surprises me how much I like The Jack Benny Show. Without a real knowledge of the characters and advertisers (Which came and went), you could easily listen to any episode, and walk away without any firm realization of which season that show appeared in. They were that routine.

There is old Jack (claiming to be 39), maybe at home or about to start his radio show, interacting with each of his sarcastic side characters, each with their own quirks. If he is planning anything, it won’t work out, because, frankly, that is how they loved Jack back then. Jack, the loveable grinch, the ignorant failure who told bad jokes and puns that everyone in his collection of friends complained about.

So why do I care so much? I can’t put my finger on it exactly, but it is there, always in the background of my psyche. My ipod is filled with episodes and in the last decade I had even played around with different writing ideas with “Jack,” from a piece of historical fiction to a biography of his time on radio, putting the spotlight as well on each of his cast members. And if my old literary agent didn’t point out to me that no one cares about radio today, I might have seriously done the historical fiction novel.

The book would have been called Benny At War and it was going to be a comic spy piece. Basically I would be in it as a character named Scott Southard. I would be a young new writer on his radio show, and Jack has enlisted me to go with him to Europe to write for a series of USO shows. Basically, it would have been my job to keep his show fresh and give him any material he wanted.

Anyway, while on our way to some troops behind enemy lines our jeep would lose a tire, and what would have started as a trek to get back to friendly lines would turn into an adventure to save some POWs.

I really wanted to write the scene when we finally were able to release the POWs and they saw Jack emerge as their hero from the tunnel we dug.

Anyway, to prepare for the book, I read a series of out-of-print books on the radio legend (including a book on his “arch nemesis” Fred Allen). Maybe it was because he was such a nice guy, or maybe it was because there was so little to him outside of all of the work he did for his show and comedy (which is fine, it was his passion; he just rested the rest of the time), but all of the books felt like milquetoast, including Sundays at Seven which incorporated in bits of his own autobiography he was working on.

In regards to the idea of any kind of biography. Well, everyone associated with the show and that time period is gone, and when you look back at articles on him or the radio show they are all complimentary, as compared to really in-depth digging articles on the creative process or its place in history. So just like the artistic medium of radio drama in America, this was also lost. Unless other cast members, like Jack did, attempted autobiographies, there is really nothing to dig through. But as my old agent, pointed out, the project would have stopped there anyway. No one would have published it or probably would have read it.

The world had moved on and creatively, I had to move on as well.

The Power of Radio

For more than 20 years, Jack Benny ruled radio. His show was so successful that it spawned two other radio shows, starring supporting cast members of his show! He even had successful movies (beyond The Horn Blows at Midnight, a stinker of a film he made in the past), but really Jack was radio. His ratings were through the roof throughout his years in the medium; to the point, he was able to successfully transition between networks without losing any of his audience.

Can you imagine if a celebrity’s in today’s world held that kind of power? They say Walter Cronkite changed the Vietnam War when he first voiced his opposition; compare that to the power and outreach Jack had through the 30’s and 40’s. He could have made or broken legislation, political careers, the possibilities are endless, but he didn’t. Frankly, because Jack would not have considered it.

See, one of the things that came out of all of the books I read about him is that he was a really nice guy. No one would have considered writing a bad word about him! In one book I read about him they reprinted the remembrances people shared about him at his funeral, and you can tell their grief at that moment. But this niceness is not too surprising when you listen to his show. Yeah, he is a penny-pinching grinch, but that is a role and the real Jack is there in the background like a nice old uncle who would invite you and your friends over for a pool party.

And in each episode you can see what kind of a performer and friend he was. He allowed himself to be the target of a lot of the jokes, giving many times the best material to his supporting cast. Dennis Day and Phil Harris benefited a lot from this and in the early years of my listening I would look forward more to their entrances in an episode than any other characters, not realizing that was more Jack’s doing than theirs.

There is one cloud to the story of The Jack Benny Show, that really impacts my listening to anything in the 30’s, and that is the shade of racism in those early years.  Jack argued in his own writing that he was ignorant to the racism on the show, until he was confronted by a very ignorant and racist soldier during World War II in a canteen.  Things changed quickly around the show then, with Rochester growing in importance on the show, no longer just a tool for some questionable humor. I don’t disbelieve Jack’s ignorance around this issue, the man even attempted a recreation of a ministerial show on the radio once, but the later Jack would never have considered it. He evolved.

Could he have done more to confront this problem (or other problems) through his show, help shape the discussion in America? Certainly he could have, but Jack never saw that really as his role. He show was an escape for his audience. A moment to sit by the radio with family and laugh, forget about the stress of the week. The fact it was on at such a friendly time as seven on Sunday shows how family friendly it was.

For me, and my 126 episodes on my ipod, it is more than an escape; it is comfort food. I can play it in the background even while writing or doing other things, it’s like music for me. It is part of my vocabulary of the world around me. Yes, from time to time, I get depressed listening to it, (thinking how all of them are gone and mainly forgotten by today’s pop culture or how radio is a dead artform), but usually I feel like I am listening to a conversation with old friends.

Which is what they are and that is all thanks to Jack.

9 thoughts on “Jack Benny as My Comfort Food”