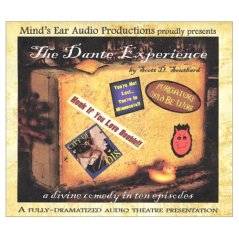 It’s Friday and today I have something special for you. Along with another trip to little ol’ Hell, I have an interview with series director, Joel Pierson.

So to start here is the link to today’s episode (8) of The Dante Experience:

Joel Pierson, besides being a very charming individual, is a writer and director of radio works. Along with his wife Dana they created the award-winning French Quarter and Children’s Zoo (You can learn more about those works via their Web site here). Recently, Joel has been working on a series of novels called The Messenger, you can find the books on amazon. Joel’s Web site is located here. Below the interview is an additional radio story for your listening pleasure- “A Camping Trip With Joe or My Search for the Meaning of It All.” It was directed by Joel as well. (The interview begins after the jump).

What inspired you to work in radio?

I started in radio my freshman year of college.  Like most kids, when I was little, I used a cassette recorder to record songs off the radio and added my own “DJ” narration in between.  When I heard that the college had a radio station, I signed up to play music.  Sophomore year, my friend Mitch Grayson invited me to act in his new radio theatre group.  He chose Agatha Christie’s The Mousetrap. I got in, and we rehearsed.  But before we could air, he asked the copyright holder for permission to air it.  Well, it turns out, there’s a clause in the contract that forbids radio, TV, and movie adaptations while the original production was still running–and it had been running for 40 years.  So we shut down.  Mitch got discouraged and didn’t want to try again, but I caught the bug.  I picked up the reins and ran the troupe myself.

Do you have any favorite work you have done in radio? Tell us about some of your other work you are proud of. 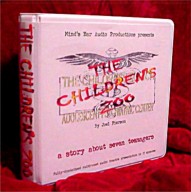 Well, Dante was a lot of fun, certainly.  And French Quarter is the series that made our name.  But I’m probably proudest of The Children’s Zoo, my thirteen-part drama about teens in an inpatient psych ward. We produced it in cooperation with the local high school, pairing teen actors with adult community performers.  And because it wasn’t challenging enough to get a cast of 20 to do a six-and-a-half-hour play, we also did a live reading–over three nights–at the high school auditorium.  Before we even cast the show, Catharine Rademacher–my co-director and the school’s drama teacher–had copies of the script that students could look at.  One young woman in her class took one, read the whole thing, and confided in Catharine that she had been depressed and was contemplating suicide, but the script gave her reason to want to get treatment instead.  When you stop and think about what theatre is for–it comes down to changing lives. We did that before the first line was even recited.

What are some of your memories around working on The Dante Experience?

We were a tight cast.  These folks had worked together in my stage production of Cannibal! The Musical, so everybody knew everybody, and we were used to making comedy together.  So the bonding was built in.  I remember teasing Danny Townsend [Will] mercilessly when he read his lines too stiffly.  But years later, when I ask people who their favorite character is, everybody says Will.  I prefer Steve; he’s such a shameless whore and proud of it.  We recorded in my home studio, so the cast felt like an extended family who came to visit and share some laughs.

One memory I have about you and Dante is the first time you heard the dinner scene at MRTW you almost fell over from laughing. Were there any moments in the recording that made you laugh as hard?

Yeah, there was one. Elif Ogan [Alison] had the hardest time pronouncing Mephist’s name.  Rather than saying MEPH-ist, she would usually say me-PHIST.  This led to the incredibly awkward and hilarious line, “I never knew what love was until I met me-PHIST.”  It’s in the outtakes, and you can hear the cast just dying.  At one point, she corrupted Victor Kinzer [Angel Michael] into doing it too.

Do you miss working in radio? Are you working on something now?

Yes and no (to the first question).  The world has changed, and I feel like radio theatre’s been left behind somewhat. Technology has made us such a visually-based society, I fear people don’t just sit and listen anymore.  I miss creating powerful shows just with sound, but people weren’t buying them, so we moved on to something that paid the bills: creating audio training materials for the federal government. We’re helping people, fulfilling a service, and we’re highly respected in the industry.  Hell, we did the official audio guided tour of Arlington National Cemetery. Who gets that chance?!  And you bet that tour is radio theatre.  Voices, music, sound effects. It’s all there.

Tell us about your writing. I would like to know about The Messenger trilogy. 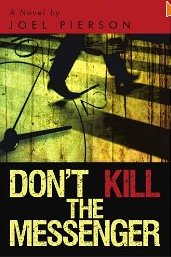 I’m currently finishing book five of the increasingly misnamed Messenger trilogy.  Working at a publishing company gave me a venue to stretch my creative legs, and I started writing about this character who, for reasons he can’t explain, suddenly has the ability to foreknow about strangers in peril.  The catch is, if he doesn’t warn them in time, he’s stricken with unbearable pain.  So on one hand, he’s cast as the “hero,” but on the other, he doesn’t want the job.  He’s the CEO of a major corporation, very wealthy, kind of a recluse.  But then he saves a couple of lives, and suddenly, maybe his new lot in life isn’t so bad. The books are available at Amazon.com, and the series starts with Don’t Kill the Messenger.  I’m really enjoying writing them.