Death is kind of on my mind a lot recently. My grandfather (who I wrote about here), died on February 9 and the loss of him and how it has impacted my every day thoughts had really made me think about death in relation to a lot of things around me. In my author-esq head, it’s not surprising that literature found its way into the mental ramblings (or should we just be honest and call them distractions from reality?).

It seems many times we don’t take “dead” very seriously in literature. Unless it is gruesome (Hi, George R.R. Martin!), or the other characters are seriously changed because of it for the worse (Seriously, why did Little Nell have to snuff it?), many times it seems to float past us as a plot device. Is it because we have a long history of people returning to life in books so it doesn’t feel as final? (Aslan, Gandalf, every comic book character, and most religious stories, etc.) The corpse is rarely there in a story, unless it has just happened; that could be part of it as well.

Death in writing is a plot device. It is a tool both sharp as a knife and as a blunt as a sledgehammer.  We cheer when bad guys die. We look at a death sacrifice as heroic, not thinking of the final end that just happened to a character.

Is it simply because we don’t see characters as “human?” So maybe it is more a fault of us writers that a readers feels, or doesn’t feel, the loss. There might be something to it. I wrote a book, MEGAN, that is built around a death and I tried to show a character from being told of the death of another with all the initial stages of acceptance over the course of a day. Hmmm… Probably why the work isn’t as popular on amazon.com than my time-traveling adventure, My Problem With Doors. So clearly, death is not a selling point.

There is a lesson there  I learned that you will not need to now. You can thank me later. 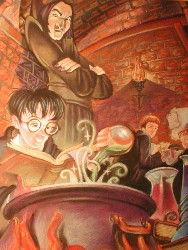 Sometimes a death can slip right by, almost as an afterthought. My favorite example of this is the first Harry Potter book. One thing I love to point out to people is that Harry Potter begins with a double homicide. Yes, we see the scene later in the series (We get a little description in the first book, just a taste). And while JK Rowling does her best to take a light approach to that first chapter (Vernon in all his heavy-set foolishness), it doesn’t change the fact the story really started the evening before when Voldemort went into the home of the Potters and slaughtered them gleefully.

Over the series Rowling does give the death more gravity, allowing Harry to deal with issues around the loss (and rightly so, she is a good storyteller), but it does make one wonder how the first book and others would have felt if the first chapter of the first book truly began on that evening, with Voldemort slowing opening the fence gate and raising his wand.

I can go back and forth on this in literature, finding examples of good uses of death and those that glorify it to some degree (Boromir! You would think he wanted to go and it is a good thing if it wasn’t for the grief of his father; and we all judge his dad for being sad over the loss of his son, don’t we?), or just use it to write off a character, but I would rather write about two deaths that actually touched me reading about them and probably influenced my own writing.

Some may forget this fact but it’s not like Hamlet was planning to kill his uncle the night of the fencing match with Laertes. He did have a feeling of foreboding, yes, but never enough to make him run for the hills (which Hamlet earlier in the play might have done). Heck, he has been finding excuses not to “get” his uncle over the entire extent of the play!

I mean, if your dead father came back from the grave and asked you to reek revenge, would you bother putting on a carefully-worded play? Of course you wouldn’t, but Hamlet does. He even considers killing himself than offing the man who got his dad (“To be or not to be” is a contemplation on suicide for those that don’t know).

I don’t know why I felt so connected to Hamlet when I first read it in junior high. Maybe it is because all pre-teens are unsure of reality, of themselves, but I understood him, and when he died I was hit by it.

There’s a great moment in Hamlet, one of my favorite, in the end when everything goes to hell. I like to call it the “Ahhhh f**k” moment in the play. It is the moment when Hamlet realizes he is poisoned and is going to die.

I’ve seen this moment rushed in plays, but for me I always imagine immediately Hamlet’s mind running with a thousand thoughts; everything he has lost, the end… and then… Hamlet, now with pure venom in his eyes (the venom that has been missing for most of the play) turns his attention to his most-deserving uncle. It almost feels like a scene in a Quentin Tarantino film when I describe it that way, doesn’t it? Kick on the Kill Bill soundtrack right there.

Now imagine a 13-year old reading that, cheering for that minute when Hamlet gets his uncle and then… collapses. Victory slipping. I felt that moment, the end approaching. And then after saving his friend from killing himself, Hamlet exits with one of the most profound and simple lines in the entire play: “The rest is silence.”

Every question Hamlet had, every worry, disappears in that sentence.

The fact the play goes on for around another 10 minutes still surprises me. 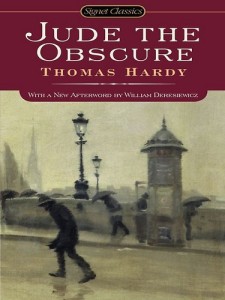 I hate this book.

Oh, it is beautifully written and easily one of Thomas Hardy’s most startling works about the culture wars in England at that period. But it has also one of most disturbing and depressing scenes I have ever read in literature.

For those who read the book, they know exactly what I am talking about. For those who don’t, do not bother checking it out, but it involved a mass suicide of innocence. I won’t say more than that.

When I read the chapter, I didn’t believe my eyes. I had such a connection to Jude and felt happy for him at that moment in his life and when it all came crashing down, I almost wondered if I had the wrong book. I had to reread the chapter.

I remember where I was when I read the scene. I was living on Michigan State campus working towards an MA in Literature. It was winter break and I was staying in my dorm for my job off campus. I remember putting the book down and thinking how quiet everything was around me.

The silence of an almost empty giant dormitory in winter.

I shivered, knowing winter like the spirit of death was outside the window; the cold wind beating against the glass.

I did finish the book, but afterwards I lay in my bed watching old Marx Brothers movies promising myself I would not read that book again.

Some authors don’t deal with death at all (Jane Austen) while others use it all time. For example, Charles Dickens is probably the king of using death in a story. Such a pro. From the dark and tragic ghost imagery around A Christmas Carol, the sacrifice of Sydney Carlton to Nell Trent (Again, why?!). He is the master, and we should all study him.

Over the last few years I’ve become obsessed with biographies. I don’t know whether it is related to the fact that I have seen “too much” behind the curtain like in The Wizard of Oz, so fiction doesn’t surprise me; or that I simply need to feel that connection to a real life. And while, they are all nonfiction I can’t escape the fact that they follow the same plot structure of any fiction book; the only difference is I typically know ahead of time what the subject will succeed at before the end. And there will always be an end. I remember reading the great John Lennon: The Life by Philip Norman and wishing and wishing that something could be done to change the end of his “story.”

But it couldn’t be changed. I knew the ending. And the ending on all biographies is the same as our own. Hmmm… The more I look at it that way, the more I am surprised I enjoy reading them.

Yet, we all get up each morning and take on the day, like characters in some grand book awaiting something we don’t want to say; counting down our days. Did anyone notice how glorious the dawn was today? Nope, I didn’t either. I think I will try tomorrow.

1 thought on “Talking About Some Deaths in Literature”