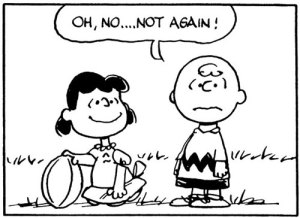 For as long as I can remember, I never have understood this whole “football” thing. It’s one of the few things that are traditional “American” that I feel on the outside of (Another is Country music for those taking notes; I don’t get that either). And every year around the Super Bowl I have to pretend.

Whatever the case, it is series of shams and lies I am guilty of; and given the chance I would rather watch an hour of the Puppy Bowl (More than an hour would be too much for anyone’s sanity).

Frankly, football doesn’t look fun to me. It stops and starts all the time, even when it gets going there is only so far to run until you stop. There is an aggressive aspect to tackling another person that looks painful even when it is not done professionally. I remember once playing as a kid and getting the wind knocked out of me in a game with some cousins. I think the first thing I said after that was “Okay, well, I am done with this now” and then I went inside.

Can I blame my upbringing?

I guess like a lot of people I can blame my parents for everything.

Oh, I don’t want you to think my parents are not healthy people, they are; they are just not that into traditional sports. While I was growing up my dad would do marathons and triathlons, but when it came to TV all we would watch that were sports were the Tour De France, the Olympics, and the occasion track and field event. If we weren’t going to someone’s house for the Super Bowl, chances are we might have missed it on our TV. So maybe that is the root of it.  I don’t have that childhood connection many have to watching the game on a parent’s knee.

Yet, my brother loves football; of course, as he explains it, it was fantasy football that got him into the sport. So a late in life conversion can take place. Maybe there is hope for me?

I grew up in Michigan and maybe since the Lions were lame for most of my childhood it was easy for me not to get excited or latch on to them as “my” team. But even with the Tigers (who weren’t lame), I didn’t feel a connection. Maybe it would mean more if the teammates all came from the area of the team’s location? So they, in other words, were the DETROIT Lions, not just a team named Lions that happen to be located in Detroit. Nice dream, but that isn’t going to happen. Whatever the case, I can’t buy into the illusion many can of claiming a team filled with millionaires owned by billionaires as “my” team.

Suffice to say, I didn’t get it during my entire childhood, and even as a member of the local high school marching band I would go to every high school game and cheer, but it was completely fake as I played my way through “On Wyoming.” Usually, I would be spending that time thinking about what was going on after the game and thinking that if that annoying kid from biology could get tackled and hurt, well, wouldn’t that be awesome?

The Romans had gladiators when they had a taste for blood and injury, maybe hockey and football are the same for our times?

Some people may take offense to that comparison, but we are talking about a sport where someone is either thrown, knocked down, or pushed every minute. And the few times I have watched a game from beginning to end, someone would inevitably head to the sidelines because of an injury (limping or on a stretcher). It’s a consistent thing, right? And all know about the repercussions from playing the game that retired football players suffer with after their time has come to leave the field.  This is not a game of Monopoly, it is brutal.

Here is another comparison, like gladiators, football players have their own distinctive “build” to them. They are big people, the average joe cannot just run out onto the field and start playing, no matter how much working out they did ahead of time. There are certain physical attributes that are needed. And like the Romans in the coliseum, we watch these giants among us hurt each other for our pleasure. The only difference is steroids, the great gobs of money, the padding that is never enough, and the TV cameras.

Is it too real?

Wrestling is fake. I’ve said it; we all know it is true. Same big people, however the difference is in wrestling the wrestlers know how to take a fall and it is scripted; there is an aggressive energy in football that wrestling only pretends to have.  The players feed off the adrenaline, the sound of the crowd and with the hike of the ball, you can hear the grunts and testosterone kick in; and, just like the fans, the players don’t know if someone is going to walk away from that play or not.

The injuries are real. The aggressiveness of it is real. And for that, I just can’t consider really enjoying it.

Oh, I will be a good dad and someday take my son to a college or professional game. We’ll eat popcorn together and cheer, but chances are I will probably be replaying Casablanca in my mind (“With the coming of the Second World War, many eyes in imprisoned Europe turned hopefully, or desperately, towards the freedom of the Americas. Lisbon became the great embarkation point….”)

When my son was born, I kept hearing how he has the physique for a football player. I’m sure people thought they were being nice and flattering him (He was a solid baby), but a part of me always did flinch at it. And while I would laugh and be cordial, inside I would be thinking of injuries and praying to myself “I hope not. I really hope not.”

8 thoughts on “I Don’t Get Football”