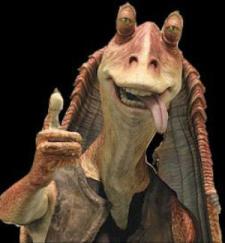 They say that being a parent is all about making sacrifices. I had already understood that but I never thought it was something concrete, I thought it would mean I was like The Giving Tree, but in spirit … But because my son is four, and he is the right age for it, I’m about to make another sacrifice, one to hang on the wall of parenthood next to my broken DVD of the first The Pirates of the Caribbean and the torn cover of Ray Bradbury’s Martian Chronicles.

I am going to take him to see Star Wars: The Phantom Menace on Imax, 3D in February.

Godfather 3 is far too over quoted by people, but seriously, I was out! Lucas and his mad skills at getting to my checkbook has pulled me back in.

Now I grew up with Star Wars (the first movie came out when I was three which was the perfect age for warping my little mind), but after all of his changes to the original trilogy he had lost me. I was free! I didn’t buy the last set of DVDs, I didn’t buy the Blu-Rays. Oh, I held them in the store, but more to study the ugly cover art on the front (and really it is bad).

One of the complaints people make about Phantom Menace is that it was aimed more at younger viewers and they are right. Jar Jar is comic relief like you would see in one of those old movie serials Lucas was ripping off from, not in a serious space saga. He is NOT Sam the sidekick from The Lord of the Rings that is for certain. There is a lot that points the film to a kids’ story from the hero child (Who flys a spaceship, shouts yippee!, and saves the day) to Jar Jar dealing with farts and alien poo. And, lets be honest, it looks like a freaking cartoon. In other words, this is perfect for my four-year old son to see and chances are he will probably… sigh… I can’t say it… argh… love it.

Whatever the case, the movie makes me sad. I wrote an essay about letting Star Wars go a bit ago for Green Spot Blue  (Right here). Yet, for something new to discuss about this major Lucas misstep, here are my ten favorite story complaints about The Phantom Menace:

1. They leave Anakin’s mom on Tatooine as a slave. A slave! And no one has any problem with that. No one. Qui-Gon negotiated with a slave owner and left her there. And we are supposed to accept that the Jedis are the good guys! They left his mom as a slave! And who are those kids Anakin talks to? Are they slave kids too? Why is no one doing anything about this!? This is horrendous on so many different levels.

2. Naboo elects 13-year old girls to rule their world. She has older advisors so it’s not like they are all young, it’s just that is who they choose. Now I am sure there are very smart teenagers out there, and some  can probably rock the halls of student government, but in charge of an entire world!?

3. Did Qui-Gon and Obi-Wan really not know that Padme was the Queen? I thought they were supposed to be insightful, and yet when the big “reveal” happens they give each other a look that says “Damn, how did we miss that?” Shouldn’t their Jedi skills have sensed that a long time ago… Or the fact that as a “servant” she had no problem debating with Jedi knights on what to do? It was so obvious, I’ll be surprised if my son is shocked by this.

4. I understand why they couldn’t leave Jar Jar on Naboo, he had to escape with them on the spaceship, I get that. So explain to me why they took him with them to the city on Tatooine? It makes no sense. Did they bring him for a laugh? Did they think he would help? He could serve no purpose on that trip besides comic relief and to get in the way… which is what he did.  Did the Jedis want to laugh at him?

5. Why did Lucas have to explain midi-chlorians? It was completely unnecessary, just say you can sense a lot of force in him. Why does it have to be something in his blood?

6. What was the purpose of Anakin being born like a messiah? This problem plays out more over the entire prequel series because it never pans out. Or if  it does, we are suspected to believe that some “higher power” wanted all of the Jedis killed (including Jedi children), the entire universe to be controlled by a dictator for two decades or so, countless people enslaved for what exactly? So this boy as an old man could kill another old man after the fact where it would have done some good for a lot of people?

7. Why the trade embargo?… No stop and think about it. Why are they closing off Naboo? Yes, it is a power play, but for what purpose? It seems like it is a lose-lose position to be in. So why agree to do it? It makes no sense. They keep saying how peaceful and wonderful Naboo is (And it is clearly not a planet covered with factories), so why close them off?

8. My favorite line in the film: “They must be dead by now, destroy what is left of them.”  Heeheehee… No take some time, think about that sentence.

9. Pod racing. Fun to look at, but why would Qui-Gon put all his hope on a little boy winning it, no matter how talented he seems. Is the force making these bad decisions for him? Was it the force that also left his mom in slavery… Sorry, I have a hard time getting over that.

10. If the goal of the Sith is to stop the Jedis ruining Darth Sidious’ plans, why did he (I hate saying this since it is the only good scene in the film) bother fighting the Jedis at the end. Couldn’t he have done a lot more damage to the resistance by stealthy walking around and wiping out all of the soldiers and THEN dealing with the Jedis and the Queen when their chances are gone? If anything he walked into a major distraction. And if he wanted to destroy the Jedis why not fight them one at a time, why go for both at once. If Darth Maul could have stopped, taken a breath, he could have done a lot more damage, made himself a lot more of a terror to the audience, and paid off in a bigger way.

OK, now I feel a little better. Who knows? It might not be so bad, it will just be bigger, louder, and more in my face. That’s what I want, right?