Recently, I lost one of my heroes.

Dr. Brent Chesley was a professor at Aquinas College and a big influence on the person I became. For a while I even wanted to be Dr. Chesley as I applied and was accepted in a Ph.D. program in Literature at Michigan State University. (In time that didn’t feel like a good match for my skills and I transferred over to the University of Southern California’s writing program where I eventually got my MFA.)

Everything was worthy of a discussion and everyone’s opinion mattered. To emphasize this, he would begin each class by welcoming his students as “persons of quality.” If hearing that, even on a stormy Monday, doesn’t bring a smile to your face, I don’t know what will.

After graduation, Dr. Chesley and I stayed in touch. We would meet for lunch once a year or so, where we would discuss writing and maybe Worf on Star Trek. We kept in touch over emails and Facebook messages. Whenever I had a funny or depressing story to share about the world of literature (and my adventures in it), there would be an email out from me followed by a few from him.

The world felt right knowing Dr. Chesley was out there. He was the fan of literature that writers dream of. Someone that will really give your writing a chance (not just skim like someone waiting at an airport) and find the possibility there. For years, he would have me come into his writing courses to speak to his students (you can listen to one of those appearances here) and a part of me always wanted to begin by saying “Do you know how lucky you are to be in this class right now?” We all have those wonders if you can go back and relive certain moments in your life which would you choose. Of course, like most people, I will point to holding my children as babies again or when my wife and I were married, but I would also include being a student at Aquinas College in that list.

When I went off to study writing on the graduate level other students would ask why I went to Aquinas College as compared to a major university. But Aquinas College turned out to be the perfect starting place for me, and the professors that were there then, like Dr. Chesley,  were able to give me the attention and focus I needed. I wasn’t just another student dreaming of publishing stardom. I was unique and special there. And we all like to feel unique and special, don’t we?

When I wrote my novel A Jane Austen Daydream I had to create a series of articles for websites and press releases about the book and Dr. Chesley would always sneak into them. For it was Dr. Chesley, who introduced me to Ms. Austen. As any of his former students will tell you he was obsessed with Pride and Prejudice and considered it one of the greatest works in English Literature. Today, I heartily agree with him, but before his class I would never have considered picking up one of her books. Oh, how wrong I was. It is one of the reasons why I gave him a cameo in the book, acting as the doctor in Jane Austen’s hometown.

It still feels right to me that the doctor in Jane’s hometown is actually a doctor of literature.

A few years after I graduated Dr. Chesley told me I could just call him Brent. It felt weird and then strangely like an honor. How many other students got to call a professor by their first name? It was something I had earned. So when I think of the person that left my life, I don’t simply think of a professor that encouraged and inspired me, I also think of a good friend… and a hero.

This week I had the pleasure of speaking to English classes at Aquinas College (Grand Rapids, MI) about my novel A Jane Austen Daydream. The classes were assigned to read my book… and after reading Pride and Prejudice by Jane Austen.  So there is a tough act to follow and literary pressure for you!

It was a fun experience for me and I decided to capture one of my discussions as an audio recording. This is the first 20 minutes or so of the class.

In this recording you will hear me discussing the inspiration behind my novel and the experience of writing it (mostly fear).  Understandably, there are SPOILERS in the discussion if you have not read the book. Also, I am quite the fast talker.

Again, I would like to thank Aquinas College, the incredible Dr. Brent Chesley and his students. It was quite an honor! Thank you!

Published by Madison Street Publishing, A Jane Austen Daydream can be purchased in print ($13.46) or as an eBook for the outrageously low price of $3.99 for Kindle. You can find it on Amazon here (http://amzn.com/B00CH3HQUU). 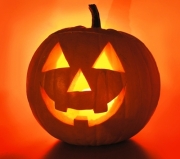 Every year around this time I always wish I had musical talent. Why? Because Halloween is a surefire money opportunity for a creative songwriter.

See, across this country, from kids to adults, people have Halloween parties, but there is no real Halloween music to play. Oh, there is “Thriller” by Michael Jackson and the awful “Monster Mash,” but what is there after that? Dance remixes of famous horror movie themes?… That’s not good enough!

And that is when an enterprising music genius steps in.

You make a CD that is family friendly, has some fun danceable tracks (maybe comes with its own dance move), add enough references to Halloween memories to stir a heartfelt response (think any classic Christmas song, most are built around memories) and you will be cashing a big check once a year for decades to come.

Sadly, I don’t have music talent and the extent of my songwriting skills only brings up corny titles like “I Want My Mummy” and “Do the Frankenstein Shuffle.” That is just embarrassing. It is even more embarrassing because I am literary enough to know Frankenstein is the doctor not the monster.

Here are the five things I am into this month… END_OF_DOCUMENT_TOKEN_TO_BE_REPLACED

A JANE AUSTEN DAYDREAM is published by Madison Street Publishing and can be purchased in print and as an eBook for only $3.99.  It is available for the Kindle, Nook, andKobo.

Jane Austen was one of my two Mount Everests.

The other Mount Everest in my adventures as a writer was Shakespeare’s Hamlet. Yes, I just said Hamlet.

See, I’ve always been obsessed with that play and even attempted over a summer to memorize every line of it (I discussed part of that experience in this comedy essay) and I always had a unique vision for the play (and how many of its famous soliquies could be reinterpreted on stage or on the screen). I decided to focus on a screenplay, and like a swimmer jumping into cold water, over the course of one week (one), I took my decade’s worth of notes, a torn paperback copy, and did it.

Yes, in my house and on my computer is sitting my screenplay adaptation of Hamlet. It is one of my lifetime dreams to see it made, but if it does is anyone’s guess. Whatever the case, I can look back on that mad week (with its large doses of caffeine, twenty hours of nonstop writing, and my mad acting out performance of it) as the literary equivalent of me standing on that snowy slope with flag in hand watching a new dawn.

Hamlet, yeah I did that.

But Austen? Whoa boy… That is when things get tricky. END_OF_DOCUMENT_TOKEN_TO_BE_REPLACED

Here is the link for episode 3 of The Dante Experience, the radio comedy series written by me and produced by Mind’s Ear Audio Productions, Inc.

If you would like to catch up on Episode 1 or 2, please visit The Dante 3 page, above. A new episode will be added each Friday.

So when I was a student at Aquinas College in the 90’s, they started a radio station. It was a pretty small affair, the signal could only reach around the campus (it traveled through the power lines or something like that, I really don’t understand how). Every DJ had free rein to do what they wanted to do, so you would get this weird collection of music being played that didn’t make anyone involved look cutting edge. END_OF_DOCUMENT_TOKEN_TO_BE_REPLACED