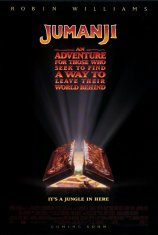 When you visit rottentomatoes.com, they only give Jumanji a score of 50%. Ouch. Roger Ebert called it “gloomy” and Owen Gleiberman of Entertainment Weekly gave it only a C+ implying that the story did not live up to the special effects. Double Ouch.

Yes, Jumanji is not a perfect film. There are moments that make me squirm, like when Robin Williams is attacking some wild vines with a sword and shouts “Harvest time!” That is not the only embarrassing shout in the film, later Judy (played by a young Kirsten Dunst) holds a checkout lane gun up at a person’s eyes and shouts “Price check!” To help emphasize the bad joke, the camera cuts to the cash register where it declares “no sale.”

Not to be a grinch, but many of the classics we love aren’t perfect. I’ll even give you a cherished example. In The Wizard of Oz, when the witch orders out her monkey army to get Dorothy she references a scene that was edited from the film. She explains to her monkeys that she had sent out bugs to tire them out first. Of course, we don’t see the fabled “jitterbug” scene happen (and probably for very good reason, it sounds incredibly cheesy). But, unless you know the history of the film, this really doesn’t make any sense at all. What bugs? What did the bugs do to them? How does a bug bother a scarecrow and a man made of tin?

Now in saying all that, I’m not comparing The Wizard of Oz to Jumanji, even though they both have many similar themes (returning to a home, forging a new family, friendship, etc.) and buy into the great myth that underlines most children stories (a normal child swept away into an adventure to find they are special). The Wizard of Oz is a classic and will never disappear. I can’t say the same for Jumanji in the future, and that makes me a little sad. There is a good chance that over time it might become nothing more than another chapter in all those future biographies of Robin Williams that are certainly being planned right now.

I love the film Jumanji. It is comfort food on the screen for me. And since the tragic death of Robin Williams (our hero Alan Parrish) I have watched it three times… and there is a good chance I might be watching it again soon.

There is a beautiful safety in books. In that time, when you are in a great novel, your focus is clear, and reality can gracefully slips away, leaving you to play in the imagination of the author. You walk with the characters, you explore the land, you fall in (and out of) love, and when the book is closed, a bit of you feels lost, returning to the too real world.

The sad thing is that when you return to a book again it is never the same. That initial spark is diminished. This is because the surprises are gone, and with each additional reading it slips more and more; until it is nothing more than words on paper, something to be almost merely analyzed. It is a memory now, a glimmer of that first magical escape.

The fact is I understand the desire to create fan fiction. As a lover of books and an author, I truly do.

It’s hard to let go, move on, especially if you want more than what the author wanted to give to you. It can feel like an early death, especially when there is so much more to live. And maybe it is that book, that author, that inspired you to write yourself! Your inspiration driven from a need for more and more.

The problem is at the heart of every piece of fan fiction there is one bit of truth, one thing the fan fiction author doesn’t want to consider:

It is not their decision whether the story continues or not.

They are not the author and only the original author should make that call. END_OF_DOCUMENT_TOKEN_TO_BE_REPLACED

1.  My parents claim that the first movie  I saw in the movie theater was The Wizard of Oz. I have to trust them on this, because I have no memory of it. A complete blank. My first movie-going memory (and possible first memory) relates to Star Wars. That memory stuck, and I can still bring it up in my head to this day. So if I really did see The Wizard of Oz with its magical munchkins, flexible Scarecrow and stiff Tin Man… well, I would have remembered that, right? How could my childish reaction be, “Whatever…”

2.  When I was growing up The Wizard of Oz meant something. This was back in the day when people didn’t own their own video recordings of it and it would be shown on TV only once a year (usually on CBS). And at that moment you knew you were watching it with everyone else. I could go to school the next day and talk about it with my friends (and we did). With the purchase of our first VCR I made sure to record it; however, I must admit re-watching it that way, fast-forwarding through the commercial breaks, lost some of the magic for me. For I knew in my heart I was watching it alone then.

3.  I also had, growing up, a record that was the soundtrack for the film. It was not merely the music, but most of the audio track of the film. No narrator voice, just the actors and the song cues. I remember sitting in my room, in front of my little record player, with eyes closed imagining the film in my mind. Everything alway seemed a little bigger, cleaner and grander in that imaginary version.  END_OF_DOCUMENT_TOKEN_TO_BE_REPLACED

Oh, I’ve won some writing awards (it’s the reason why my books MY PROBLEM WITH DOORS and MEGAN were published- they were both honored in a writing competition), and was very grateful, but it still feels odd to me. I have no problem telling someone that a story they have is great, for example, or another writer that their story needs work, but to say one is better than the other… there is that queasy feeling again. END_OF_DOCUMENT_TOKEN_TO_BE_REPLACED

Let me say this off the bat– SHERLOCK is one of the best written TV series I have ever had the pleasure to watch.

I love all the twists and turns and surprises in each episode. I think the actors are great in their parts and I look forward to each new episode. I’ve already seen two of the three new episodes of season two, and it is even better than the first season. As a fan, I hope the series goes on for another 10 years.

OK, I got that off of my chest.

Now, let me say I feel slight tinges of guilt for loving and supporting the series, because it is not Sir Arthur Conan Doyle’s vision. Oh, they are his characters (the main ones, albeit with cell phones), but they are not his stories, his world, his words, his adventures, his time period. The creators are–to put it bluntly and completely on the table–taking what they want from his stories in piecemeal, and remaking it for their own profit.

Again, I love the series. I want it to go on, but it does set a precedent that makes me a little concerned. Because of this series’ success are we going to see “new versions” of classics all over the place? Is that a good thing? And more importantly, does it give the respect to the original artist that they deserve for their own creation?

Consider this, if SHERLOCK wasn’t such a well-made, well-written series would we be as happy around the enterprise?

If it was crap, I can guarantee you that the Sherlock Holmes fan sites around the world would have risen in protest around it. The fact it is good, helps. So do we say, it is OK to “reinvent” an artist’s creation as long as it is good?  And who defines good? I don’t know about you, but I typically don’t trust TV executives to make that call for me. END_OF_DOCUMENT_TOKEN_TO_BE_REPLACED