I have recently written a post about my new book Permanent Spring Showers. It is called “Throwing Logic to the Wind” and is being showcased on author Nancy Christie’s site Focus on Fiction. Here is an excerpt from the beginning:

There is no logic to writing. At least that is what I have learned playing this author game.

It doesn’t matter how much I have outlined a work, considered its potential on the market, or other such nonsense, there is no guarantee that it will fly or even work in the slightest. My computer is a graveyard of abandoned characters and plots. Their folder names are like little tombstones to the stories that might have been. And just like a visit to a real cemetery, there is an almost eerie silence when I explore that realm on my computer.

Permanent Spring Showers, my latest novel, is a great example of the non-logic of creative writing.

You can read the rest of the post here.

Permanent Spring Showers was just published by 5 Prince Books. It is available on all online retailors but you can find it on amazon here in both print and ebook.

Part two of my interview with blogger and author Nancy Christie is up on her site! (You can read part one here.) Check it out via this link!

In this segment of the interview, I dive more into my life as a writer and a reader. For example in this question I am asked which three authors I would like to have a “one-on-one” with.

The idea of meeting a hero has always been terrifying for me. For example, one of the authors I would put on the list would have been Kurt Vonnegut. But I had his home phone number for years on my desk! I am not kidding, for years. It was given to me by a friend. I just never had the courage to call him and now it is, of course, too late.

I think someone needs to sit down with William Shakespeare and get the truth on the authorship question. That interview has to happen just so we can get the discussion behind us, good or bad.

Growing up, I exchanged a few letters with Ray Bradbury. I would have loved to have spoken to him in person. He was very kind to me then.

You can read the rest of the interview here. Thank you Nancy for this chance to speak to your readers!

My latest novel, A Jane Austen Daydream, can be purchased in print ($13.46) or as an eBook for the outrageously low price of $3.99 for Kindle. You can find it on Amazon here (http://amzn.com/B00CH3HQUU). 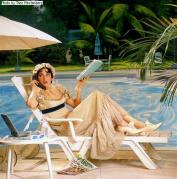 Last month I was interviewed by novelist Nancy Christie as part of her “One on One” series. It was quite a long and fun interview, and she has turned it into a two-part series for the site!

If you ever wanted to get really into my writing head, meet the wizard hiding behind the curtain, this is that interview! The first part of her interview was released today; you can read it here.  In this excerpt is my answer to the most challenging undertaking I have had as a writer:

A JANE AUSTEN DAYDREAM was easily the most difficult book I have ever undertaken, because I had to be true to Jane. In other words, I wanted her to be alive on the pages, which means her own dialogue and spirit had to be part of the narrative.

So first, I had to research her life and her books thoroughly. I used to be able to quote entire passages of her novels! (Not anymore, now that space is taken over by cute kid songs from Daniel Tiger’s Neighborhood thanks to my young daughter’s obsession with the show.)

Then I had to decide what of her life I wanted to keep and what I wanted to use for the book. See, I wanted the plot to be influenced more by her own stories than her actual life (it is a daydream).

After the plot was in place (with some very notable surprises and literary twists included), I then had to write a book where her voice would feel natural, but not too dated to scare off a contemporary reader.

Yes, it was a slow process, with each sentence and chapter written and re-written numerous times. By the end, I felt like I had run a marathon (or at least what I assume that would feel like). But it was all very worth it.

My latest novel, A Jane Austen Daydream, can be purchased in print ($13.46) or as an eBook for the outrageously low price of $3.99 for Kindle. You can find it on Amazon here (http://amzn.com/B00CH3HQUU).