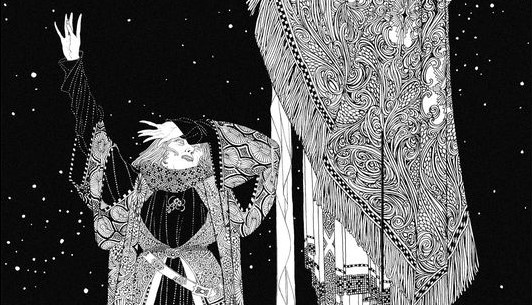 Denmark 1926. The world is on a powder keg, the old world is in conflict with the new, still recovering from World War I. Jazz and flappers. Cocktails and parties. In this tumultuous time, the king of Denmark is found dead… but his spirit is not at rest.

Uses of this World is the tale of the people around the events of Hamlet, from the soldiers to the royal family. Each is tied to the outcomes around the crown. And the country, as well as the world, is waiting to see what happens next.

For the first time in Prince Hamlet’s life he felt lost. Truly lost. This was not the garden maze of his youth. The well-worn turns and dead ends were now covered with dark leaves and thorns.

These thorns dripped black blood and stank of time and neglect.

Hamlet remembered chasing after the vision of his father, racing down the stairs of the parapet walls, and into the royal garden maze. Then everything changed. Not just in the environment but in his mind. The fog was everywhere, more than covering the ground, sticking to the very air around him, entering him, becoming part of him.

What time was it? How long had he been in the maze?

“Mark me,” a dead voice echoed around him in the air; like a wind, passing by and then racing away.

Hamlet stopped, he felt out of breath. Was he out of breath or was the air so dead that there was little for the living? “I will.”

A path opened up in the maze in front of him; the thorns turning aside, granting passage, with breaks and splinters in the wood and vine. The leaves on this new path were a dark green but eerie bright. The green reminded the prince of the glow of the kingly specter. A nightmare was in front of Hamlet, welcoming him, and he entered. END_OF_DOCUMENT_TOKEN_TO_BE_REPLACED 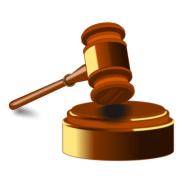 On Saturday, I drove past the scene of a murder.

I circled the block three times, studying the real places that before only existed to me as images on a screen or as a faded picture circulated between me and the others on the jury. But it was real, so very real, and strangely all smaller than I expected. I think I made them all bigger in my mind, because during the three weeks I was on the trial they felt big.

Monstrously huge, making everything in my life, my concerns, my worries, seem small and petty.

You worry about bills? We were discussing life and death and part of that was on me. Guns and bullets and questionable detectives and criminals aplenty. Two weeks of witnesses and theories and arguments, and one week of deliberations. And here it is months later and I still haven’t come to grips with the fact that I had a hand in deciding whether someone would spend the rest of his years in a jail cell.

That was my life then in April and I hated every minute of it… and I hate that I still think about it so much today. END_OF_DOCUMENT_TOKEN_TO_BE_REPLACED 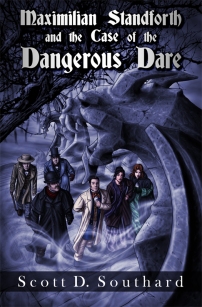 “If you like your supernatural books where reality mixes with the impossible, the inexplicable, then this is the book for you…. It is beautifully written.” GoodReads.com

Need an eBook for this Memorial Day Weekend? Want something different, unique, unpredictable? Consider one of my latest novels Maximilian Standforth and the Case of the Dangerous Dare. It is free for a very limited time on amazon for Kindle. You can find it here (http://www.amazon.com/Maximilian-Standforth-Case-Dangerous-Dare-ebook/dp/B00CXSDEBE/ref=sr_1_2?ie=UTF8&qid=1400851518&sr=8-2&keywords=Scott+Southard). Grab a copy today!

“I started this book expecting a Sherlock Holmes style mystery with a bit more humour and got so much more than I bargained for!… If you have read any Jasper Fforde,  imagine him writing whilst tripping on acid.” amazon.co.uk

This is one of my favorites of my books.  Maximilian Standforth and the Case of the Dangerous Dare is the supposed fifth book in a fake mystery series. Here is the back cover description:

The cursed and foreboding McGregor Castle is the most terrifying and haunted location in all of the British Empire. Only a brave (or foolish) soul would consider visiting it, let alone staying within its walls for five days. In other words, a perfect dare for a man like Maximilian Standforth!

Maximilian Standforth, famed playboy aristocrat and private detective, is a genius with dangerous tastes. With Bob (his trusty carriage driver, biographer, and body guard) and Maggie Collins (actress, spy, and maid) by his side, Maximilian will experience horrors and madness unlike any seen before. For it is at McGregor Castle that the team will discover more than they ever could imagine in this very experimental and genre-breaking thriller.

You can enjoy a test run of it with the first chapter below. And if you do decide to grab this free eBook, would you consider showing your thanks by grabbing another of my novels as well? A Jane Austen Daydream is only $3.99 on Amazon here. My other two novels (My Problem With Doors and Megan) can both be found exclusively on Google Play for ebook here (which will work on Kindle as well).

“This book proved to me the writing skill of Mr. Southard! I believe the man has quite the imagination, albeit a twisted one” Goodreads.com

END_OF_DOCUMENT_TOKEN_TO_BE_REPLACED 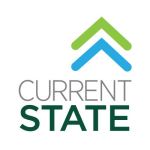 I have a new book review on WKAR’s Current State this week! This time it is for the new J.K. Rowling novel The Cuckoo’s Calling, which she wrote under the pen name of Robert Galbraith.

You can listen to my radio review via this link- http://wkar.org/post/book-review-jk-rowlings-cuckoos-calling

If you would like to purchase a copy of The Cuckoo’s Calling or learn more about it, you can do so on Amazon here.

A transcript of my review is included as well below. END_OF_DOCUMENT_TOKEN_TO_BE_REPLACED