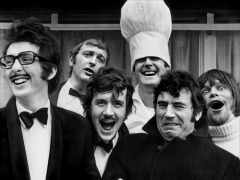 …As I write this I am wearing a t-shirt from TeeFury that has the black knight from Monty Python and the Holy Grail fighting Darth Vader. (I believe we can all guess how such an mind-blowing awesome encounter would end.)

…Also, as I write this my ringtone on my phone is the King Arthur theme from Holy Grail. So a call not only makes me run to the phone but also consider grabbing one or two coconuts (without African swallows to hold them up).

…I own every episode of the series (including the German episodes), a bunch of documentaries, the movies (of course), the live show, CDs, and a pile of books on the history. To be able to talk to me for more than an hour it is almost required that you have a smattering of Monty Python in your vocabulary to draw from because, oh yes, I quote them all the time. More than Shakespeare (and that is a lot, usually with a poor British accent), more than song lyrics, more than anything. They are lodged permanently in my brain, and most times when I think of them they are in drag (maybe I should see a doctor). END_OF_DOCUMENT_TOKEN_TO_BE_REPLACED

When I originally decided to write more on the blog as my New Year’s Resolution, one of my initial ideas was to capture each month what I was into… and then I skipped doing it in January.

So I guess in January I was into NOT writing about five things I am into.

It’s a snapshot into my life at a given time. A diary, if you will, of consumerism, as compared to creation and original observations…. Boy, that sounded much better in my head than it reads.

Looking over this list, I think you can tell it is February and cold out and I am looking for some extra sunlight someplace. February is never a good time for moody or dark stories or music. We have enough of that in the crisp air and short days.

What I love about The Artist the most is how much it loves films. It is riddled with references to classic black-and-white stories, including a few great homages to Citizen Kane. Would I like this film as much if I didn’t love the movies that inspired it? I can’t say. It is light on plot, but most films like this were and are.

For me, I couldn’t stop smiling during my watching of it. And while I wrote before about how I think the idea of giving awards for films is kind of silly…  I really want it to win the Oscar for Best Picture.

Does this make me a hypocrite? Yeah, probably. A terrible, terrible hypocrite… END_OF_DOCUMENT_TOKEN_TO_BE_REPLACED