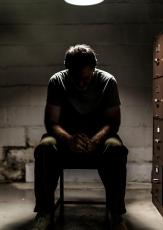 Hi everyone! Got a drama recommendation for you if you are in the Michigan or Midwest area!

My brother, Adam Emperor Southard, has a new play opening at the Two Twelve Arts Center in Ypsilanti, Michigan. Produced by From Around Here Productions,  I’ll Be Waiting will run exclusively for one weekend in 2016, from January 7 through January 9. Here is the description of this new work.-

The evidence of violence is there: Crissy’s blood and fingerprints are on the steering wheel; her broken necklace is found at the crime scene; even her abandoned and torched car points to an attempted cover up. The only thing missing is Crissy. Sheriff Mills knows the longer he takes to put the pieces together, the less likely he is to find the young woman alive…if she’s alive. But as he sets about questioning those closest to Crissy, Mills discovers each lover, brother, and friend reveals a different dark side to the story surrounding Crissy’s disappearance, leaving him to doubt his own conclusions at the tragic end.   I’ll Be Waiting by Adam Emperor Southard is a suspense thriller about buried secrets, love, anger … and vengeance.

You can learn about my bro’s new work on the site for the theater company here. If you want to snag a ticket, you can do so by visiting this website. I hope to see you there!