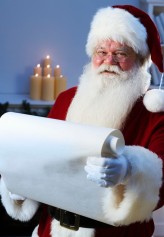 I totally get it.

Each year the media world is starving for new holiday stories. They want them for the bookshelves, for the TV screens, and the cinemas. So why wouldn’t any struggling writer (which is 98% of us) not want to give the old Santa Claus an adventure or two?

It pays the bills and, maybe, you will unwrap the golden present. In other words, create a holiday tale that becomes a classic, one that audiences return to yearly… which can also pay the bills yearly as well.

The problem is that for all of the attempts to make that blessed holiday classic it so, so rarely happens. Most holiday tales disappear at the end of the year. The books and the DVDs end up in the bargain bins, and the TV specials and movies are shown at random times in the early morning (if they are shown at all).

Recently, I reviewed a new collection of holiday short stories called My True Love Gave to Me (edited by Stephanie Perkins). My review will be on WKAR’s Current State later this month. I don’t want to say too much about my review here, but the book, in the end, just left me feeling sad.

Not exactly a Christmas feeling, I know, and probably not the one most of those contributors were hoping for. But it is a common feeling for me each year as I dare to check out the new holiday samplings from my fellow writers.

So why is it so difficult to write a good Christmas story? Basically, it is because most holiday writers seem to forget four important stocking-stuffing-ho-ho-ho points. These points are what separate the classics from… well… anything on the Hallmark Channel. END_OF_DOCUMENT_TOKEN_TO_BE_REPLACED

Recently, I happily discovered that a picture of me wearing a fur coat and brown tights was finally off the internet.

The picture was from 1998 and for over 15 years it has dogged me on the worldwide web. With a few scrolls down through my name on any search engine (pass the covers of my books and headshots; you know, the important stuff an author cares about), there it was, always waiting for me.

When I signed up for the graduate-level course in Medieval Literature (at Michigan State University), I was expecting a challenge.

Actually, I was expecting a massive challenge!

I heard rumblings from past students of the class, everything from translating to long writing assignments. While I love diving into classic literature, I have to be in the right mood for the older, more historical entries. I’m not the kind of person to relax with Chaucer on a Sunday morning (even though I do have a pic of him on my wall and I did once mimic his style in a very long short story). At least Chaucer can be a little bawdy and playful, but you have to earn the Chaucer in such classes. And usually that due is paid by Caedom and Margery Kempe.

Medieval literature, the literary equivalent of a hairshirt.

But it was required for my MA, so what could I do? I decided to put my own writing aside for a semester and accept my fate.

However, as we got closer to the start of the semester, my fellow students and I started hearing from the professor. This year we were to do something different, something special. It was obvious the professor was thrilled and he wanted us to feel that way as well. Maybe with another group of students he would have gotten a bigger reaction, but typically bookworms (i.e., graduate students in English Literature) don’t usually like to be thrown on a stage.

Yes, I said “stage.” See, we were not going to be studying Medieval Literature, we were going to be performing it! Watch out Broadway! END_OF_DOCUMENT_TOKEN_TO_BE_REPLACED

Talking to a mechanic or a car dealer is like talking to a Dr. Seuss character for me. Seriously, they could say anything and I would believe it.

The fop-whistle on the groaning plate is off by three particles.

Sure, I reply and nod.

Apparently, the peanut butter cup pancakes at Denny’s are only good in theory.

Who designs their menu? Is it just a bunch of guys debating over beers? This is how I imagine the discussion of their “master chefs” in the corporate offices:

“Should we add more chocolate chips?”

It’s been over 20 years since I have been in a marching band, so why is it that I still walk in tempo?

AND when I try not to walk in tempo a part of my brain seems to revolt in disgust. I just can’t do it. It feels like a success and a failure all at the same time. END_OF_DOCUMENT_TOKEN_TO_BE_REPLACED

So last night my wife and I were woken up by a bright light and then a bang. Then there was silence and darkness…

Yup, we are one of the lucky people who lost their power in the big ice storm of ’13. The rest of our evening was spent huddled in our living room listening to branches falling from the giant tree outside our house. To emphasize the lack of power one of the branches decided to take out the wire as well connecting our home to the grid. Merry Christmas!

Anyway, I’ve snuck onto a computer to share some of my holiday posts. Writing about the holidays is always one of the things I get a kick out of doing on the site, and I do everything from comedy to serious topics. For me, fighting the cold, it’s nice to know people are still checking out my writing while I am living the life of a hermit… in my own freaking cold home.

I have a personal Grinch.  I have never met him, but I know he is out there; and he knows I’m out there as well. We are connected, we share a history.  And it is not a history I would have chosen for myself… obviously.

No one wants to be a Who

When my son (my first born) was only a month old, we stayed at my parents’ house for Christmas Eve. On Christmas Day we raced home, looking forward to sharing our first Christmas as parents of a perfect and beautiful baby.

I first realized that something was wrong when I pulled into the driveway. Something was off. The air around me was different. A sickening feeling suddenly tightened my stomach.  Once I was out of the car, I quickly surmised the awful truth of the situation. I told my wife to stay in the car with the baby and the dog.

Our house was broken into on Christmas Eve and our first Christmas as parents was forever ruined. END_OF_DOCUMENT_TOKEN_TO_BE_REPLACED

Last week, I actually cried while reading my daughter’s bedtime story. Looking back, I think I was set up for this moment.

My family is big fans of the books of Mo Willems and, in my opinion, there is no more imaginative and witty author of children picture books out there today. To say he is this generation Dr. Seuss or Maurice Sendak is not to do his creativity justice. That is not to say he is better than Dr. Seuss; no, what I mean is he is on his own path.

He is incomparable, unique.

And I, honestly, wish his books were around when I was my little ones’ ages. I would have devoured his books like a box of Macaroni and Cheese…

I have always been allergic to cats, which means my relationship to them has been one of avoidance for as long as I can remember. Unfortunately, most cats do not know our little “arrangement,” and seem to seek me out, enjoying the little sufferings that they cause me as I sniffle and cough at their mere presence.

Each time this occurs, the cat owner will laugh and tell me how cats always seek out the one with allergies, the one showing them the least interest. They always seem amused by this idea; me, I have always have seen it as something more sinister. Yes, I might giggle out loud but inside I am preparing for the possibility of feline confrontation.

Okay, let me clarify, I don’t think cats want my downfall, nothing like that; I simply think cats know they have some power over me and relish in it.

Finally, able to put a human in its place—that has to be the thought—as they rub against my legs, crawl up on my lap, or rub against my arm. Leaving their fur everywhere they can, knowing that I will have to wash everything when I get home.

Little bits and pieces of torture with fur. END_OF_DOCUMENT_TOKEN_TO_BE_REPLACED

It started the night before and I was deep in sleep when she broke the news we needed to leave for the hospital NOW. I was so deep into it that it took almost a minute of her waving at me, as I stood dumbfounded, that we needed to move.

I drove so slowly to the hospital, my wife was getting frustrated. I wanted everyone to be safe, I even avoided the highway, worried about drunk drivers.… Yes, it was a Sunday night, but someone could be drunk on a Sunday, right?

Once we were there my wife’s suffering began as future parents after future parents went in the delivery room before us. Finally, I had had enough. There are only a few times I can remember that I got all “extreme,” but this was one of them, as I confronted the doctor and nurse in the hallway. They said there were two ahead and I corrected them, without blinking, no, my wife is next… After five minutes of arguing, my wife was being prepped and ready to go.

One of my most vivid memories is of my son’s birth. When we first heard his cry, my wife turned to me, her mouth open in surprise, tears streaking her happy and tired face.  Then they showed him to us. His face was bright red from the screaming. I asked politely (and very overwhelmed) if I could see him; they of course said yes. I stood over him consoling him. At the sound of my voice he immediately stopped crying and then rolled on his side towards me.

After writing about Maurice Sendak and his work yesterday (You can read that editorial here), it inspired me to really think about what books I enjoy reading to my kids.

Oh, like my kids, I do have favorites… I also have the “opposite of favorite” books…

Am I the only parent who hides books they can’t stand to read again? Is that just me?

Anyway, here is my list of my 10 favorite books to read with my children: END_OF_DOCUMENT_TOKEN_TO_BE_REPLACED