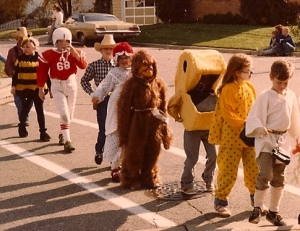 So when I was a kid, my mom used to make me Halloween costumes (I’m the Chewbacca behind the Pac Man). They were really quite impressive. Sadly, I don’t have that skill, nor do I even try to pull something like that off. And it’s gotten to such a point that if I brought up the idea of a homemade Halloween costume, my kids would probably revolt.

Which got me wondering, is something lost in not going to that trouble anymore? Yes, all of the kids walking around look exactly like their target, but has a bit of the heart been lost in the endeavor? Of course, if the kids have no idea of what I am talking about, maybe this is me just being grumpy.

I mean, look at pumpkin carving these days. I like to do a simple face, but when you see all the tools and skills out there, well, I look lame. And telling the kids this was fine a few decades ago doesn’t cut it.

Okay, where was I? Halloween posts!

I’ve had the pleasure of being on WKAR’s Current State for three Halloween episodes now.  I’ve reviewed and talked about (with links):

Here are some other posts (with links too) I have written about one of my favorite holidays:

I hope you have a great holiday (with or without a handmade costume).

A costume draws people’s eyes towards you almost like being on a stage except it’s more personable. There isn’t the protective separation because of spotlight and distance. It’s real, you are a dude dressed up and they can see you… and talk to you.

I have always been impressed with people that have the strength to put on a costume. I look at them with a certain amount of awe, even those that attempt the cheaper creations. Of course, there is nothing like a great one though. For example, there is a woman down the street that on Halloween will dress-up as the Wicked Witch of the West from The Wizard of Oz and she has the look and cackle down perfectly. It can take a fan’s breath away… and also instinctively take two steps back in fright.

For me, I never feel more like an introvert than at this time of the year. I go into my shell as I hand out candies; always being sure to give a little bit more to the kids who look truly great.

Oh wait, does that make me a bad person? The fact I judge a kid’s costumes and award accordingly?

Actually the more I think about it, the more I am embarrassed I admitted that. Because even those in a bad costume are braver than me at that moment. But if I was to dress up… END_OF_DOCUMENT_TOKEN_TO_BE_REPLACED

Art Institute/I never look enough, I scan, scan, scan…/crowds fascinate me/I spy on the conversations/their casual  mole/stealing moments around the moments captured on canvas/chiseled out of stone/moments around moments/I sit & think of that turn of phrase-

I will probably always worry-

I should look around more/but I scan, scan, scan…-

I almost buy a shirt- END_OF_DOCUMENT_TOKEN_TO_BE_REPLACED

Every night my children go to bed with cheetah cubbies that may be leopards.

They are cheap stuffed toys, the kind you see at the front of lesser family restaurants. Nothing extravagant, but wherever they go in the house, they are usually in the same room, many times next to each other. And each evening, they are needed for nighttime or there might be tears.

The cheetahs started with my son when he realized how fast they were.

My son has always loved to run. Back when he used to go to daycare and I would pick him up, on every nice day he would be in the playground racing with his friends. The teacher would just shout “Go!” and watch the kids run around and around again, not considering it was the parents that had to deal with the kids with sweat-soaked hair that would always need a bath later.

Now my son wasn’t always the fastest, he did good, but there were always kids a little faster since they might be older or just plan bigger. But that didn’t matter to my son, he would always tell me on the way home how he won… even when we both knew he didn’t.

He was Dash from The Incredibles for Halloween when he was four then the year after that The Flash. Whenever either costume was put on he would get this look in his eye, scream “zoom” and take off running around our house hoping to find a bad guy some place.

A red blur of speed!

Last Christmas, my daughter gave her brother a giant stuffed cheetah. (Well, actually the parents did but she happily took credit for it, she was one then.) My son immediately declared it was the mommy cheetah, and they both happily agreed. The cheetah cubbies were grabbed and quickly were reunited.

They are now a family of cheetahs. END_OF_DOCUMENT_TOKEN_TO_BE_REPLACED

I don’t believe in magic.

I also don’t believe in witches, ghosts, wizards, dragons, unicorns, demons, devils, poltergeists, vampires, werewolves and anything else that might go bump in the night.

And, for those curious, I don’t believe in angels either.

None of these things exist (or could exist) in the world I see around me every day. And if any of these things really were real, there is no way it would be a secret to all of us. If there is one great truth about human beings, from the North Pole to the South, it is that we are all lousy at keeping a secret. Remember, even Deep Throat said who he was before he died, and that was a secret kept by only three people!

Frankly, we would all know about Hogwarts.

I wish I could see a ghost.

Because I would find the experience incredibly satisfying. END_OF_DOCUMENT_TOKEN_TO_BE_REPLACED

Autumn is around the corner, and in my neck of the woods the leaves are just starting to change colors and my son is already talking about his Halloween costume.

He wants to be The Flash this year, but next year he wants to be Captain America with a shield which he threatens to throw around; so it’s good for everyone (especially the dog) he is The Flash this year. My daughter is Princess Leia, because I thought it would be cute and she is too young to argue; and I made sure to pick it up before the mom got a chance to say no. Yes, I am happy with this action on my part, and I will do it again in a heartbeat.

Okay, I must admit I skipped on my list last month. And that is okay, seriously, I had no time, focusing most of my attention on writing my book while listening to Fiona Apple. Yeah, Fiona’s new CD (The Idler Wheel…) is definitely becoming my mental soundtrack for this opus, but I already talked about the CD enough on this site. You don’t need to read me praising it again… Oh, what the heck– it is my favorite CD of the year so far and you should buy it.  Onto my list: END_OF_DOCUMENT_TOKEN_TO_BE_REPLACED

I’m on solo dad time for the next few days.

This is not a big deal really, I keep an eye on my two little kids without the wife around all the time, but I do admit my son has been known to call the evenings when it is just the three of us (and the mom is away) “silly nights.”

That is the dad I am in many ways. You could call me the “prop comic” of fathers, always coming up with new games and new ways to play with toys. I think I average about two to three a day, but don’t expect me to remember any. I usually forget them the minute after we have moved on to the next activity.

I’m not the kind of parent who feels comfortable with the television and movies for helping pass the time. I don’t want that crutch. I want the parental interaction, but after eight hours I can get… well, silly.

Pesonally, I don’t know how teachers and at-home parents do it. I would go a little stir crazy if I couldn’t find things to challenge myself mentally with during the day. I love being a dad, don’t get me wrong, this isn’t about my super kids; this is all about me and it is true in most things I do. I always need my mind to be working to be happy. Anyway, I have three fallbacks I pull out if I need to keep my mind in the game. END_OF_DOCUMENT_TOKEN_TO_BE_REPLACED