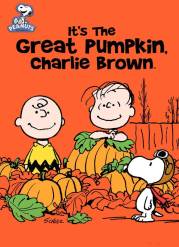 So I have to accept the fact my kids are not going to be into the Peanuts. I truly see the generational gap there. While I can write a post dissecting the interworking genius of It’s the Great Pumpkin, Charlie Brown (which I did do here), my kids would rather watch something else.

Actually, my son had a really good answer for not wanting to watch the show. He said they used bad language. Which is true, if you consider the word “stupid” a bad word, as we try to do in our house.

And while my son loves looking at my old comics (especially Calvin & Hobbes), he has no interest in looking at Peanuts. So while I’m busy each year collecting the complete works (thanks to the releases by Fantagraphics Books), my old paperback copies sit gathering dust on his shelves. Once I tried reading him the books and he was startled by them.

“Why are they so mean to Charlie Brown?”

Now how would you answer that? Is it funny to be mean to someone? Are we laughing at a child’s pain? In our age of fighting bullying, is Charlie Brown a victim? Granted, in the later years of Schulz’s writing, Charlie Brown took a back seat and much of his torture disappeared (usually everything seemed to be about Rerun), but it is there in the early years tenfold.

In the next year we’ll be getting a new Charlie Brown movie. The trailer looks beautiful, but I wonder how they will handle this stuff. It could either be a rebirth for the franchise or the final nail in the coffin. When Charles Schulz died he made it very clear he wanted everything to stop after his passing. His family seems to have done everything possible to keep it going though; yet, a part of me believes Schulz had it right. Especially now.