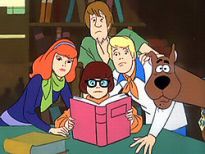 This might as well be called my month of nerd. With the continuously releasing news about Star Wars Episode 7, Doctor Who, The Hobbit, and everyone else fantastical, I’m in many ways in nerd heaven. Heck, I even thought the last season of Game of Thrones was the best one so far (which I wrote about here)! And there have even been rumblings about Indiana Jones!

Now, here is the thing that has been obsessing me more than any other (possibly making me a king of the nerds)- I’ve got an idea for a Scooby-Doo movie.

You know how they seem to release one to two direct-to-video Scooby-Doo cartoon each year? Some are great (and I have seen them all, so I can judge), some are okay and some are frankly bad (for example, when Shaggy sings a love song to his alien girlfriend). Well, I have an idea/plot/synopsis for a Scooby-Doo cartoon movie and it is doozy.

I’m not joking! I have an idea for a Scooby-Doo animated movie and it would be freaking great!

The trick (and it is a big trick) is figuring out how (and who) to throw my synopsis at. You see I would love to write this script (and it wouldn’t take me long), I just need to know if it would be read before I go to the trouble of doing it. So here I sit, twiddling my thumbs trying to figure out exactly how someone gets a message into the world of WB Animation. Seriously, I have no clue.

Now before anyone worries, I won’t be changing anything we know about Scooby-Doo if this script is picked up and the beats we all expect in his stories. I don’t want to break the mold; I just want to create a fun adventure in that world. Also, as a parent of two little kids who are obsessed with Scooby-Doo, it would be really great to do something like that for them.

“Hey kids, guess what? Your dad wrote a Scooby-Doo movie. Want to watch it?”

Oh, these are all just dreams, I get that. Without contacts or an agent (who works specifically with writers around this) to go to WB Animation and pitch the idea, it will only be a fun daydream. I just can’t help but dream… dream of Scooby Snacks and pizzas covered in ice cream, anchovies, pickles, hamburgers, and salami, that is.

Now on to my very nerdy list for this month! END_OF_DOCUMENT_TOKEN_TO_BE_REPLACED

Last year, I wrote a post on the holiday where I summed up all of my feelings around it (You can find that piece here). I wrote about how odd it is to see Woodstock eat another bird in the Charlie Brown special for the holiday and I did this deep thing about how maybe we should reconsider the holiday; as compared to the starting mark for Black Friday. In other words, a typical Southard post.

Well, that post did some good numbers on the site, so I thought it might be fun to take it on again… So I thought… and thought… and then banged my head on my keyboard. Seriously, I have nothing else to say about the holiday. Nothing. Nada. Zip.  I then considered just reblogging that post, but I already did that once before. As Charlie Brown would scream “Argh!”

This year my wife is making the turkey for the first time. I’ll probably attempt to watch some of the Macy parade with my kids (which always seems to have more commercials than floats). I’m not a football dude, never have been. I think that goes back to a memory I have of one of my cousins tackling me which knocked the air out of me. After that I rarely showed interest in the sport.  I was done. So I’ll watch the kids, help my wife when I can in the kitchen, and countdown the days until I can write about Christmas.

I always have something to say about that holiday.

Here are my five things that interest me this November. END_OF_DOCUMENT_TOKEN_TO_BE_REPLACED