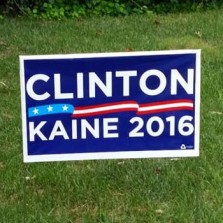 I’m going to share with you my one real crime.

And I got away with it completely. There has never been an arrest or a warrant on this one. So the big secret is about to come out. Are you ready?

I once stole political lawn signs from neighbor yards!

Yes, I am a thief. Here is what I would say to a judge:

But your honor, I was young! Only 18! And it was a joke. A practical joke, honest! You’ve done bad jokes in the past, right? Well, that is what this is! Just a simple laugh.

See, I had this friend in high school who had very strong opinions about the election that year (she was one of those souls that has a strong opinion about everything).  She wouldn’t stop talking about it. It drove me crazy! If I wanted to get her goat about it, I would point out that she would not be able to vote, she was only 17. But I would be able to. It actually was my first time voting and I was pretty excited about it.

This was the first election of Bill Clinton, going up against President George Bush and Ross Perot.

The friend detested those who were considering voting for the President. While I was looking forward to voting for Clinton (even though my first choice was Paul Tsongas), that ballot felt like my first step into adulthood. I vote… then graduate from high school… and then enter college. A real American grownup.

Anyway, so one day I had heard enough about her opinion about the election; and after school thanks to a free hour, I went out and collected about half a dozen lawn signs from the yards of strangers. I stuck them all around her mom’s front yard.

That was my one crime and I was never caught.

Judge, can I plead the fifth? I already talked and admitted it? Damn…

Over the years, my opinion about elections and politics grew. In many ways, I can thank reading, college, and my obsession with NPR for that. When I moved into my first house with my wife I was a little excited to have my own lawn sign. Of course, part of that excitement was because of the candidate.

I had been a fan of Barack Obama for years. After his great speech in 2004, I read his book Dreams From My Father and was really impressed by the honesty in it (definitely not the kind of book someone planning to be president writes). It used to frustrate me in 2008 when people would claim not to know what was in his heart.

Really? Are you serious?

Just grab the book, it’s all there.

Two elections and numerous local elections, my yard has had different signs. Sometimes one of my neighbors might have one with an opposing view, but there was never an argument. We didn’t throw various fruit at each other’s houses like Bugs Bunny and Daffy Duck. It was just a different opinion. That’s America, right?

Up until this year, I had never really worried a great deal about the other side. They seemed to love the country as well, just view various key issues from a different perspective. Of course, I have to admit there are some issues that do make me wonder (I’m a fiction writer, so it is usually safe to assume I am on the left on most things).

Those are the moments when I have to scratch my head. They are sticking points that keep me on the left of the spectrum, but I never wondered if the country I loved would change if someone with a different opinion was elected.

Like most people, I’ve done my hardest to try and figure out what is going on in this election. It boggles my mind why people side with Donald Trump, who has a record of lying, racism, sexism, and every other  bad “ism” you can name. Yet, they want to believe that this “possibly successful” businessman will take the office, and with no political experience, know exactly what to do to “fix” things.

(Honestly, I’m still a little unclear about what needs to be fixed, but that is another topic, and really I would just be repeating a thousand stories we have already read about the questionable real estate tycoon.)

As time goes on, and crazy comment after crazy comment get made, things seem to be getting scarier. You watch the rallies and listen to shouts and you can’t help but feel hints of what Germany was like before World War II. For the Nazis it was the Jewish population and the other European countries to blame; here it is immigrants and those that are different from them (in religious belief or skin color). So many conspiracies…

I still have hope that cooler heads will prevail and Hillary Clinton will win.

Today, a stranger took down the Clinton/Kaine sign in my yard.

Here is the question that haunts me about this. It is just one word:

They aren’t trying to change my opinion, not at all. If they wanted to do that, they could have knocked on my door and had a conversation with me. I’ve had politicians knock on my door before, I don’t mind.

This action is something different than a debate.

They are in a way attacking my position. Just consider, they had to walk on my lawn (probably with my dog barking away from the window) and take it down. If anything, this stranger was trying to silence me. And they did it in a way that made it clear they wanted me to know that they did it.

They left the sign in pieces there on the grass.

My reaction to this may sound a little dramatic, but wasn’t the action of doing that dramatic as well? When you hear supporters of Trump talking about violence if he doesn’t win, you first want to laugh. Today, I don’t feel like laughing. I pray that everyone votes for sanity in November.

So while I write away, wondering about meaning and the future of our country, I kind of wish for more innocent days.

My old friend returning home to all those President Bush lawn signs in her yard. She probably smiled and mumbled my name… for she knew exactly who did it.

Enjoying the writing? Why not show your support by checking out my newest novel?

Permanent Spring Showers was published by 5 Prince Books. You can find out more about my novel as well as my other books (including A Jane Austen Daydream and My Problem With Doors) and grab a copy via my author page on Amazon.com here.