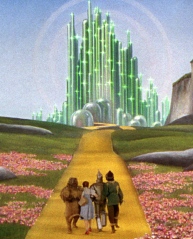 1.  My parents claim that the first movie  I saw in the movie theater was The Wizard of Oz. I have to trust them on this, because I have no memory of it. A complete blank. My first movie-going memory (and possible first memory) relates to Star Wars. That memory stuck, and I can still bring it up in my head to this day. So if I really did see The Wizard of Oz with its magical munchkins, flexible Scarecrow and stiff Tin Man… well, I would have remembered that, right? How could my childish reaction be, “Whatever…”

2.  When I was growing up The Wizard of Oz meant something. This was back in the day when people didn’t own their own video recordings of it and it would be shown on TV only once a year (usually on CBS). And at that moment you knew you were watching it with everyone else. I could go to school the next day and talk about it with my friends (and we did). With the purchase of our first VCR I made sure to record it; however, I must admit re-watching it that way, fast-forwarding through the commercial breaks, lost some of the magic for me. For I knew in my heart I was watching it alone then.

3.  I also had, growing up, a record that was the soundtrack for the film. It was not merely the music, but most of the audio track of the film. No narrator voice, just the actors and the song cues. I remember sitting in my room, in front of my little record player, with eyes closed imagining the film in my mind. Everything alway seemed a little bigger, cleaner and grander in that imaginary version.

4.  The first time I read the actual book by Frank L. Baum I was disappointed. Baum created a classic, surely, but his story feels lacking. He is in that literary camp with the original Peter Pan- great idea, so much potential, but the actual book so-so. In Baum’s Wizard he missed the metaphors the film so squarely hit. See, in the movie, the scarecrow always was smart he just didn’t know; same goes for the Tin Man’s heart, the lion’s courage; but in the book, they really did have to earn them. Even as a kid I thought that was a missed opportunity. And the illustrations were a little odd.

5.  I read all of the original Baum books on Oz, all fourteen. The funny thing is, while usually I have a good memory for plot and characters, nothing sticks really with me from the books… Besides the odd twist that Ozma began as a boy who didn’t realize he was a girl. That made no sense to me. Of course, when I learned later (as an adult) that The Land of Oz was based on a play Baum wrote and that twist worked well on stage that seemed to make it a bit clearer. There are always twists like that in theater. However, reading it as a kid it just felt weird. How did Ozma not know? Seriously, one trip to a Men’s room should have given the ballgame away, right?

6.  As I said, the rest of the books didn’t stick with me. Usually, Oz was under stress from something outside their borders. Someone wanted Oz or to attack it for some odd reason, but everything turned out okay in the end. It always did, and it always felt like missed opportunities… Wait! I do remember I thought it was nice that Dorothy and her aunt and uncle came to live in Oz. When you watch the old film, with the look of the Dust Bowl and the Great Depression, don’t they deserve it?

7.  When I was a kid my local Civic Theater did a production of The Wizard of Oz. I went to the audition hoping to be cast in it (dreaming of being the Scarecrow, reluctantly accepting the idea of a Munchkin), but I wasn’t. I wrote about this experience before in this post. And while I was not cast in it, my younger brother was…. He was Toto. Yes, for a time I was the brother of a very popular dog. You should have heard all of the mothers in the audience swoon when he entered the stage during each performance.

8.  While I loved the original film of The Wizard of Oz, I never got into the whole “re-imagining” versions of it. For example, yes, I know there are people out there obsessed with Wicked, but I always felt it a little weak of Gregory Maguire to take another’s work and ease his own story in (Of course, now he has a career at doing that to others’ masterpieces). I also feel that way about attempts to write sequels to another’s story.  It’s all just fan fiction, just the level of financial gain is different. When I did finally see the musical during a tour a few years ago, I wasn’t impressed. It seemed to work really hard to justify everything and the music was so-so…

9.  Yet, when I went to see Wicked, there were people there dressed as witches! I kid you not, they were dressed up, and they weren’t kids. They were adults. I can get the whole ComicCon dress up thing (imagining myself as Indiana Jones or Doctor Who… No, I’m not kidding), but they dressed up to sit in the dark in a theater. It’s not like they were part of a festival atmosphere. It was just them… dressed up… and all of the rest of us, attired for a normal night at the theater, looked at them. I am sure each of us were secretly wondering, “What do they know that we don’t?”

10.  My wife and I could win awards. We are that amazing a couple. She is for dance, I am for literature and we support each other in our endeavors. And while typically we sync on most things, one of the things we don’t is The Wizard of Oz. My wife just doesn’t like the film. I’ve tried for years to figure out why, even tried watching it in front of her as well, but she just walked out of the room. It is not something that can be psychoanalyzed out of her (and I have tried). She just doesn’t like it, and sometimes when I am sitting across from her a part of my brain can’t help but ask: “Why? Seriously, why? Not even the Lion?”

11.  Ever since I became a parent, I have dreamed of giving my children the “movie experience.” Taking them to a show that inspires them, makes them realize the power of escapism that is a good movie. While my eldest enjoys movies and going, sometimes I think he is more into the popcorn. But it is still fun to take him to the theater, even though he keeps swatting my hand away each time I grab for a few kernels. The Wizard of Oz came back to the movie theater as a special IMAX/3D experience and I had to take him. At least that is what I said, but a part of me wanted to go… well… for me. See, I wanted to see the movie through his eyes. Remember that excitement, that youthful joy. I felt a little guilty about that, but of course we did go, no doubt.

12.  I expected, seeing the movie again for the first time in years an emotional reaction on some level, but in IMAX and in 3D it was more than I was anticipating. And it was when I least expected it. During the early part of the movie when you saw the three farmhands fixing the cart (our magical heroes later), it got me. See, at that moment, they felt so real, for the first time real. The IMAX and 3D experience did that. They were right there. I know the film is 75 years old and all of the creators have shuffled off this mortal coil, but that moment everything felt so alive again. It was awesome.

13.  As I wiped the tears from my eyes, my son was busy munching the popcorn next to him, oblivious to the experience I was having. It was after Dorothy’s performance of “Somewhere over the Rainbow” that my son leaned over to me. He tapped me on the arm, and I looked down, loving the smile on his face. He spoke quickly. “I feel like I am in the story.” For the next hour and a half I completely agreed with him. You can go back to Oz, no ruby slippers required.

If you liked reading this post, why not check out one of my books? I’ve had four novels published in the last few years, A Jane Austen Daydream, Maximilian Standforth and the Case of the Dangerous Dare, My Problem With Doors and Megan. You can find them via my amazon.com author page here, or as an eBook on Google eBooks here.  Thanks for reading!

12 thoughts on “Time on the Yellow Brick Road: 13 of My Thoughts on The Wizard Of Oz”