A JANE AUSTEN DAYDREAM is published by Madison Street Publishing and can be purchased in print and as an eBook for only $3.99 via amazon.com here.

I went to England to find Jane Austen.

(Winnie-the-Pooh? Yeah, with some research, I figured out where the real 100-Acre Woods is located and spent a day wandering the fields, visiting Roo’s Sandy Place, sitting at the Enchanted Place, finding the north pole, playing poohstick on the actual poohstick bridge. As a kid who has fond memories growing up with A.A. Milne’s classic books, I was in children literature heaven. It is a magical and natural place, please don’t tell Disney!)

That was me at age 23, Scott the explorer, the new college grad, future “bestselling” author (in my mind), chasing down the legends, my heroes. I’m not sure what lofty goals I had, per se, in making the six-week solo trip to England. I mean, I wasn’t expecting any “haunting” encounters or secret treasures to discover, but it was a voyage I needed to take. I needed to escape the confines of my small West Michigan world, and chase down the locations that made my heroes… well… heroes.

At this point in the creation of A JANE AUSTEN DAYDREAM I had the seed of the idea, but whenever I sat down to make an outline of a plot I would get muddled. See, I couldn’t put my finger completely on Jane as a character.

That’s one of the funny things about Jane as a writer. When you read her books, you can feel her alongside you, laughing with you, leading you down the path of her narrative, but when you have to define her as an actual person things get complicated. Her heroines have so many different traits; Emma is very different from the Bennet sisters, etc. She is so good at characterization you have to wonder if any of her “real life” experience or traits inhabit any of her characters.

Most scholars will argue that writers grow from book to book, so could an argument be made that she is more like Catherine Morland from NORTHANGER ABBEY than her others?

I can’t imagine a character like Catherine (even with her wild imagination and love of books) creating novels. Some Austenites would point to Anne Elliot from PERSUASION for being the most like her (maybe the book is playing out a fantasy she had about a returning love?), but that would be a much later creation when her skills were at the strongest. Would it be near the end of her career that she would really allow herself to slip in? With someone with her literary skills it feels like a moment of weakness.

So in many ways this first trip to England (with nothing but a full backpack and a paperback showing famous literary locations), was a test for A JANE AUSTEN DAYDREAM.

The possibility of this novel becoming a reality rested on this outing. 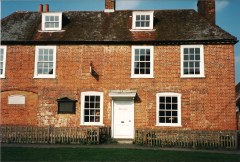 The first place I went around Jane Austen was the Jane Austen’s House Museum in Chawton. This is where Jane spent the last years of her life. It is where some of her classics first took breath and where many of her works were finetuned.

Chawton is a small village and not at all easy to find. I had to take a train trip and then walk to the village. Once arriving, it is very charming and I can see why fans of her novels love visiting the city. It feels like one of her novels could take place on those streets, in those gardens, in those fields… yet, something felt off to me.

Jane’s actual house, which is the museum now, was a modest home even in that time period. Since Jane’s living there, there have been some structural changes to it. Yet, it is still easy to imagine her wandering those halls, sitting in that garden. And as I walked through the little building I took many pictures. Pictures I knew that I would return to later if I was able to find the key to her character. Still, in each little room, my feeling of discomfort was growing. Yes, as I visited each room, the feeling increased until I had to leave and sit in the garden, get a breath of fresh air.

It was then, looking around me, watching other visitors come and go, that the feeling that had been haunting me so prevalently became clear…

That is not to say she didn’t enjoy her family’s company or her friends in the village. I’m sure most days she must been happy with the arrangment…. But my gut was telling me that quiet day that on many days she felt utterly trapped, stuck in a world she couldn’t escape from. I’m not going to compare it to a prison. But consider what the life of someone with Jane’s ability would be like today, and then think of a person like that living in such a small environment with little resources, and little capability for growth because of her gender.

You see what I mean?

Then add in the fact that her books were anonymous. She had no writing friends, no one she could talk to really about her favorite artform, her passion.

This may sound bleak, but  it is this realization into what her life might have been like that made me feel like A JANE AUSTEN DAYDREAM could be possible. 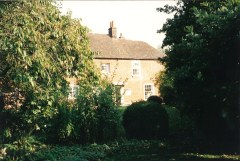 See, at the time (and even very much so today), I’m a struggling author, trying to find an audience, dreaming of possible literary success. I can relate to that feeling, that desire. I can also relate to the feeling of being isolated, not feeling like others around me “get me” or even sometimes understand why I care about literature and books so much. For many books are just books, for me they are a lifestyle, as important as breathe.

No wonder Jane did so much during her eight years in this home. It was her only escape, her only way to be herself fully.

Writing was life and it was all she had.

I would go on after that trip to also visit the Jane Austen Centre in Bath (they interviewed me about the book which you can read here) which definitely is a wonderful tribute to her, and even the cathedral where she is buried.

I hope no one feels that I am criticizing the Jane Austen’s House Museum. No, I love the place. And, if A JANE AUSTEN DAYDREAM (which you can now on find amazon here) is successful I plan to make a donation to it. See, it could be argued that it did exactly what it needed to do for me. It gave me an insight into Jane and her life.

That visit made Jane real.

If you liked reading this post, why not check out one of my books? I’ve had four novels published in the last few years, A Jane Austen Daydream, Maximilian Standforth and the Case of the Dangerous Dare,  My Problem With Doors and Megan. You can find them via my amazon.com author page here, or as an eBook on Google eBooks here. Thanks for reading!…