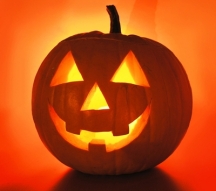 I don’t believe in magic.

I also don’t believe in witches, ghosts, wizards, dragons, unicorns, demons, devils, poltergeists, vampires, werewolves and anything else that might go bump in the night.

And, for those curious, I don’t believe in angels either.

None of these things exist (or could exist) in the world I see around me every day. And if any of these things really were real, there is no way it would be a secret to all of us. If there is one great truth about human beings, from the North Pole to the South, it is that we are all lousy at keeping a secret. Remember, even Deep Throat said who he was before he died, and that was a secret kept by only three people!

Frankly, we would all know about Hogwarts.

I wish I could see a ghost.

Because I would find the experience incredibly satisfying.

You want greater proof that there is life after death, talking to a dead person could handle that argument. But since I have yet to speak to a dead person, I probably fall into the camp of an atheist, even though I “feel” more like an agnostic or possibilian. I really like the theory of possibilianism, so let stick with that one for the time being. For a creative writer it’s a lot more fun, because it leaves the door open for all possibilities (here is a link for more info). It’s not a “my way, or the highway” way of looking at life that you get from most religions. Honestly, until we know better, everyone’s highway is fine by me for the explanation for life, the universe and everything… as long as it doesn’t throw anyone who disagrees into a fiery pit of Hell (which I also don’t believe in).

Anyway, so if I was to bump into a ghost, I would take a few deep breaths (I mean, it’s a ghost!), and start by asking the following questions:

The last question is the one that would mean the most to me, because I love this planet. Would I like to haunt it? You’re damn straight I would like to stay around and haunt, haunt, haunt!

If given a choice, I would join the 999 ghosts at Disneyland’s Haunted Mansion and scare the bejesus out of guests every day. I would position myself near the end of the ride, during the musical number (which I would never get bored of), and pretend to leave with the guests. I couldn’t scare everyone doing that, but there are a few each day that I would definitely leave a memory with.

When I saw Ghostbusters in third grade I was terrified.

I know, I know… it’s a comedy (and a damn good one), but the idea of death and possession really took my imagination away. (I’ve always struggled with a big imagination, which is one of the reasons to this day I can’t watch horror films. Don’t believe me? Ask my wife what it was like living with me after seeing Paranormal Activity.) For a few nights after seeing it I was up, eyes wide open, staring at each of the shadows of the room, not allowing a single specter to take me by surprise.

I remember in one of the evenings, after finally giving in and screaming for my parents, my dad came in and decided to make me feel better by explaining that there is no such things as ghosts and chances are when people die that is it. So nothing is going to get me. Because, honestly, they are nothing.

Looking back, I can understand where he was coming from that late evening when he shared that pronouncement, but with my brain (and years of Catholic catechism under my belt), that was a mind-altering thought. It kept me up long after I forgot about the movie.

The thought still keeps me up sometimes to this day.

I love the idea of Halloween, but I have never had the courage to embrace it fully as an adult. This is mainly due to a traumatic experience I had on a Halloween back when I was in graduate school at Michigan State University.

I was working at a bank at that time and we were “told” by our supervisor that it would be a “good idea” for everyone to come in costume that day.

A few years earlier, while in London, I got my hands on a John Lennon sailor cap, and decided to go as a Beatle. So I combed my blonde hair down, put on the hat in a jaunty fashion and a thin black tie and went to work.

For the entire day, customer and customer came in believing that I was NOT a rock god but the little Dutch boy from the paint cans.

If that doesn’t turn you off dressing up, I don’t know what will.

Growing up I rocked Halloween thanks to my mom. She could make anything and I have fond memories of being Super Grover, Chewbacca, Ernie, and others. It was never cheap plastic costumes out of a bag for me. If I wanted to be a character, I was that character.

I believe I even won a few Halloween costume competitions because of her work.

Ever since my son became obsessed with superheroes (he is almost five) I’ve been dreaming about how cool it would be to surprise him as a superhero. Maybe part of this is related to the fact that for my son his grandfather (my pop) is his hero, not his own dad.

No, I have no idea where that leaves me either.

But if I was to be a superhero, would it change things in his eyes?

The problem is first off I can’t see it being a reasonable investment, because, the fact is unless you are paying to rent one of the great costumes they all look piss poor. I’m sorry but a shiny yellow plastic Batman belt is not a real utility belt with pockets. Do I want to walk around the neighborhood looking like a crazy adult wearing a superhero costume that they ordered via the internet, or a rocking cool dad who is also a real superhero?

Maybe I am putting all of my expectations too high around the endeavor?

Whatever the case I’m sure it will be another year handing out candies for me, glancing a little enviously at the adults nearby that had the courage to dress up.

This year my son is The Flash (and the costume looks great) and my daughter is Princess Leia. Why is she Princess Leia?

The reason is obvious: she is one and this is probably going to be the last year I have a say in the matter. So I jumped on that option before anyone (my wife) could say no. And technically for those complaining, she is a princess just like every other little girl that will be knocking on doors… Just a princess with a blaster.

After the passing of Ray Bradbury I reviewed a few of his books for my site, looking for a lost classic. Many times, the books I found were lost for a reason, but there was one that really stuck out to me. It was The Halloween Tree and it really influenced my view of the holiday.

Yes, the book has some minor issues (mainly around character development), but it had a great philosophy, and probably one of the best last lines I have read in a book in a long time.

The thing is, as compared to Christmas or any national holiday anywhere, the one thing EVERY human and creature on this planet does share is death.

We will all die someday, and Halloween is, in a way, our dark celebration of that universal truth. And whenever a person is confronted by sadness, don’t they want to eat candy (treats), be around friends, take part in games (tricks), and maybe dress up (hide yourself as someone else)?

It all makes sense to me in a beautifully, dark morbid way… it is a wake we all share together for ourselves.

9 thoughts on “Halloween, In Spirit”