I feel like over the last month, I have been doing nothing but battle a cold that will. not. stop.

It has gone from my body into my soul.

Was there a time when I was able to complete a sentence without a cough? Did I ever not sneeze? I can honestly say I don’t know. So as you can imagine, my list this month involves a lot of things I can sit down and enjoy… Right now I like sitting.

It’s fascinating how this show has adapted over the years.  What began as somewhat a mystery around the identity of Don Draper (and who would find out and then what???), has now become almost nothing more than a character study as we watch time pass in their lives. (Dare I call it a soap opera?)  I’m not sure if the lack of suspense or overall plot development is related to some larger vision the creator has for the season that he hasn’t shared yet, or a repercussion of the series being picked up for more seasons; in other words he has to pull his punches because he has to drag it out (The same problem you see every week with How I Met Your Mother– those poor kids listening to that non-ending story! I love a good yarn, but I would have even walked out on the story by now).

Still I am really glad the show is back on the air and it is fun visiting the characters again. I just wish something big would drive it forward.

Visiting With an Old Me

So in the arts, when you create anything, it has the side effect of creating a personal time capsule. Every story, every script, every play is an insight into yourself at that time period. It does more than a picture ever could since you tap right back into your emotions and thoughts of that period with the act of simply turning a page.

Yes, this is a heavy thing.

And with Green Spot Blue sharing my collection Upon The Ground (you can read some of the selections via the links on the Upon The Ground page), and my sharing of  The Dante Experience (to be found in The Dante 3 page) and the scripts of the sequel; it has been one long trip down memory lane.  For example, in the collection, most of the stories were done when I was in my twenties and a few even earlier. That to me is mindblowing.

So while you are simply reading a story, I am seeing a lot more.  I see an earlier me, deciding what to do with his life (and then deciding again), accepting his lack of religion (and the relief he feels in letting that hubbub go), and not understanding the opposite sex at all.

I’m not sure how healthy it is to revisit the past too much (an artist should always be focused on what’s next, everything else is stagnant), but for the last few weeks it has been kind of fun. 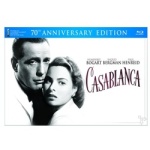 I’m sure I have bought Casablanca almost a half dozen times in my life. But this new version released on blu-ray is gorgeous. The transfer is spectacular.

Besides the film the box set contains a few little odds and ends that are less than great, like a picture book (with nothing really new inside it to see), a folded poster (which means you can see the fold, so not worth framing) and coasters. Seriously, coasters… Is that the best idea they had on the table? Can you imagine that marketing meeting:

“Well, they drink in the movie.”

“And people use coasters when they drink! Raises for all!”

Well, done marketing people. Well done… And as coasters go, they are fairly ugly. Coasters of different posters would have been better.

Still, it is all about the movie. And it is still the greatest film ever made, and because of the transfer I would recommend it highly… and you do need some new coasters, don’t you?

So is there a special contract out there between the creators of this show and HBO relating to nudity, sex, and violence?

It’s not like George R.R. Martin’s books don’t include that stuff in spades, but it seems in the series, whenever they add something to the story, it includes at least one of the three along with it. (“This scenes needs something… How about boobs?”)  I don’t want to be too much a prude, but why go down this road unless you have to for the sake of the story? I mean they have the fans, it’s not like people are debating over watching this show or Cinemax After Dark, for example.  Just focus on the story!

Okay, that last complaint done, I am enjoying the new season, especially Tyerion; which is not surprising. I just wish I had a better idea where everything was going or what the main goal is for the story (there is no Mount Doom to work towards, in other words), but that is my main problem with the books as well.

Forget all my complaints about HBO above. Their HBO GO App has made my month. From evenings feeding a baby, to… well, just about whenever… this is the greatest app ever. I have access to so, so many things.

Thanks to this app, I have seen Game Change (which I thought amazing and scary), Recount (depressing and brilliant), the last season of Flight of the Conchords, two old school Star Trek Films, the new X-Men film (I actually, surprising, liked a lot), the new Ricky Gervais comedy (which I didn’t like that much)… and that is just the first two weeks!

I’m not sure what HBO gets out of letting me watch all of this for free, but I will not complain. I like free awesome things.